LITTLE BY LITTLE, STEP BY STEP. The universe is starting to listen to me and take my suggestions to create a better world.

This morning I pulled the Toyota into the parking lot at St. Arbucks and I noticed a large sign tied to a steel barrier by the front door.

Happy Hour at St. Arbucks? Two weeks when their “Frappe-whatevers” will be half price. Well, Yippee-ki- yo – I guess.

Leave your day behind. Forget the stress and strain of the job and drown it all in a pancreas shattering blast of sugar. 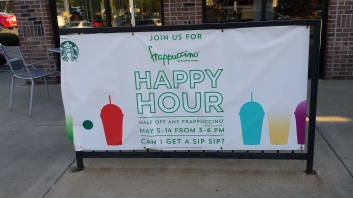 I like the concept of the traditional Happy Hour. I think it can salvage a lot of sanity at the expense of a few brain cells, but this sounds like an event subsidized by Weight Watchers and the Insulin Suppliers of America –Incorporated.

Don’t get me wrong. If you’re a sane adult I think you should have a pretty darned wide latitude of what you can do with your own body – as long as you don’t scare the horses or foul the footpath. I just find this version of the Happy Hour institution to be outside of my own personal boundaries of what I can and will consume. I don’t even know where we keep the sugar in our own kitchen. I do know where the bottle of Buffalo Sauce is though.

The part of this “St. Arbucks Happy Hour” that I do like is that Seattle seems to be coming more amenable to expanding their menu marketing.

A few months back the District Manager or whatever his title was and a couple of “Suits” from the Corporate Office were visiting the Chapel and I was able to get their collective ears for a few minutes. I was a geezer with an idea and I wanted to offer it up to them, free of charge.

My suggestion was to remodel the store, adding a second floor, and opening up a Tiki-Bar up there, offering real adult beverages. I thought it was a good idea. Apparently so did they because the District Manager announced that they were already modifying three stores in Indianapolis to have a “21 and

over” second floor. The liquor licenses were already being processed. A nice idea, but no Tiki statues, palapas, or fire pits, and no grass-skirted servers. That’s no fun. That’s just another bar.

I haven’t been inside one of the new two-story St. Arbucks yet. I suppose, that in the name of accuracy and idle curiosity, I must venture forth on a fact finding mission. Perhaps after the local “Happy Hour” promotion is finished so I can do an honest comparison.

Once I get this thing fully organized I may charter a bus if anyone else might like to come along. Of course, a goodly portion of those coming on the bus must accept duties of “Designated Drivers,” just in case the analysis gets a little deeper than planned.

As far as “Half Priced Frappa-Whatevers” are concerned – if that’s strikes a responsive chord in you – go for it. I want that business to be a success so I can continue to have my morning unsweetened coffee quietly seated at my corner table. Heaven forbid that they went belly up and I was forced to go someplace else. My world would wobble and I’d have to start sipping my coffee from a paper cup. I don’t know if I could handle that. I’m such a sensitive soul.