Reblog from The Bluebird of Bitterness – “Happiness Is A Warm Pun.”

A Great Reblog from the Bluebird of Bitterness

Some people say that puns are the lowest form of humor. Well, they’re wrong. 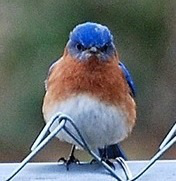 The opinions expressed are those of the author. You go get your own opinions.

A musician on a cruise ship had trouble keeping time with the rest of the orchestra. Finally the conductor said, “Look, either you learn to keep time or I’m going to throw you overboard. It’s up to you. Sync or swim.”

A teddy bear was working on a construction site. He took a lunch break, and when he returned, he found that his pick had been stolen. The bear was upset and reported the theft to the foreman, who said, “Oh, I forgot to tell you — today’s the day the teddy bears have their pick nicked.”

Several of the attendees at a chess masters convention were loitering in the hotel lobby, bragging about their past victories. The hotel manager came over and ordered them to disperse. When they demanded to know why, he informed them that the hotel rules strictly prohibited chess nuts boasting in an open foyer.

5 thoughts on “Reblog from The Bluebird of Bitterness – “Happiness Is A Warm Pun.””