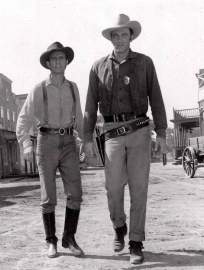 THERE IS A GOOD REASON my wife, the lovely and unfailingly perceptive, Dawn, calls my trips to St. Arbucks, along with, “The Usual Suspects,” my “Play Group.” I admit that there are some days when the maturity level drops below Pre-School closing in on Pre-Natal.

For several days now the main topic of conversation among the group has centered on the television western series, “Gunsmoke.” This show hasn’t been on the air since 1975. Why this has become important enough to warrant two days of conversation is unknown.

I understand the lure of nostalgia – the being able to share common memories with contemporaries who are now getting along in years. What I can’t understand is why it has become necessary to dramatize scenes from the show – right there in the corner of the coffee joint. It mystifies me and I think it scares some of the staff and other customers.

The conversation seemed to center around one character on the show: “Chester Good” – portrayed by Dennis Weaver, a mediocre actor at best.

“Chester” was the Deputy to Marshall Matt Dillon, played by James Arness and irrelevant to this discussion.

The character of “Chester” was disabled on the show. His character was gunned down in an early episode and for the rest of his time on the show he ran around with one leg, unbending, and stiff as a pool cue.

Week after week he would scuttle around, getting in over his head with the local bad guys. He would then run, after a fashion – stiff leg swinging out like the line on a weed eater, and yelling, “Mr. Dillon, Mr. Dillon, come quick.” Not exactly a showcase for Mr. Weaver’s acting chops, but it paid the bills.

How all of this was remembered by The Usual Suspects in 2015 is where things got dicey.

After describing “Chester” and his “mobility issues” it was determined by one Suspect that more was needed to illustrate his point (Whatever it was). He also thought that it would help if he performed Chester’s lines, but his recollection veered a bit from reality.

The Suspect hauled himself out of his chair and began to stiff-leg it across the floor. Then his dialogue came out, loud enough to reach the back row at the Hollywood Bowl.

It was at this point that I tried to hide under a table. I’m positive that “Chester” never said that on network television – ever.

This breach of nostalgia etiquette had the other Suspects trying to force him back in his chair.

“Sit down! You’re going to get us all thrown out of here!”

I peeked around and all of the baristas and other coffee drinkers looked like prairie dogs – alert with eyes wide open, wondering what was happening. Was the big guy with the bad leg going Postal? Was he a threat or merely nuts?

The answer to that particular question was: All of the above. But I’m not being judgmental.

Now, all of this could be written off as a quirky, one-time event, like Ross Perot or World War Two, except that there was an encore performance the next day.

When I arrived on the scene this “Faux Chester” was already wound up like a Joy Buzzer and moments later he was off and running, albeit with a significant limp. I was still near the door, so I just sidled over toward the recycling bin and pretended to be checking that things were being sorted properly.

Most days at St. Arbucks are quiet, contemplative even, but this week it was more like being trapped inside bad Community Theater.