I Used To Tie One On

I WAS LOOKING IN MY CLOSET YESTERDAY. It was like gazing into a Time Machine. There are clothes in there that I haven’t worn in years. Some don’t fit anymore. Some never did fit, and some I used to wear to work.

And then there are The Neckties. 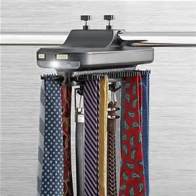 For years, through a succession of “Day Jobs,” I wore a necktie to work every day. It was part of my Armor. The necktie was supposed to set me apart and above the people I often had to deal with. I always saw it as the other way around: it made me look like the subservient one, forced to wear a uniform that gave the other person a convenient handhold, just in case they wanted to throttle me.

For the last job that I held, before my wife and my doctor insisted that I retire, I wore a necktie on rare occasions – if I had to go into a courtroom, or a classroom. When I did have to wear one I called upon the panoply of my necktie supply in the closet to see me through.

All of those neckties are still hanging there, like a bundle of old flintlock rifles, ready to be hauled out in case the Redcoats come over the corporate horizon.

I took a few minutes to go through them, looking at each one, and trying to remember why I bought it in the first place. Some were bright and gaudy. Others carried the Regimental Stripes that were very “Executive” and carried a serious look about with them. And then there were others that were best described as “Nondescript,” and did little more than fulfill the factual definition of being a necktie.

As I stood there I realized that I hated them all. That is a pretty strong statement to make about a piece of cloth, but it’s true – I hated each and every one of them – except one.

There was one tie hanging in that closet that was my subversive secret weapon in my private war with “The Office.”

This is it. This was my Trojan Cow.

When I was informed of an obligatory meeting, usually about something that could have been resolved with a couple phone calls or over lunch, I would change into my Cow tie. I kept it safely in my desk, handy in case of a sudden meeting.

The beauty of this tie is that at first glance it is just a swirling pattern of red, white, and black. It wasn’t until one looked at it for a minute or two that the Cows began to emerge. There were many meetings where a sudden and inappropriate spasm of giggles would erupt from the other side of the room as someone finally saw the herd.

They may have been Cows, but it was as close as I could get to Bull – a silent commentary on the proceedings.

I bought the necktie back in the late 1980s from a street vendor in San Francisco for a mere five bucks – money well spent. The picture of it displayed here came from a Google search showing that the tie is still available – but for $18.

What am I going to do with all of the other ties? Some people might suggest that I give them to Goodwill for someone else to wear. That would be like passing on my chains to someone else after I escape from the Slave Galley like Ben-Hur. No, I think I’ll buy some marshmallows, find a nice twig, and toast ‘em up.

I hope that I will never have to wear a necktie ever again on a day in – day out basis, but I‘m ready if that day ever comes.

I’ll be set until the cows come home. 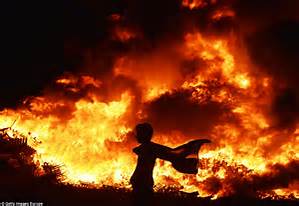