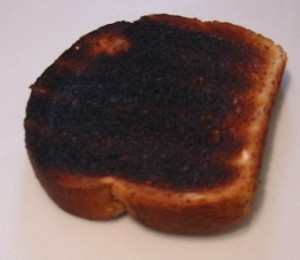 THERE ARE GOOD SIGNS and there are bad signs. And then there are signs that are just disappointing.

The other day when my wife (the lovely and epicurean, Dawn) and I were out and about around town. And we were feeling hungry. It was a little after two in the afternoon when I spotted a café that had a large sign in the front window –

That was an idea that appealed to us both, so we pulled into a gimp spot right outside the door. It was then that we spotted another, smaller sign that read –

So much for “Breakfast Served All Day.”

Maybe we should have been tipped off by the fact that there were no other cars in the lot, but I already had visions of pancakes and eggs dancing in my head.

Lost in our disappointment we ended up at another café, new to our neighborhood, that also promised “Breakfast Served All Day.” It was adequate, no more, and burned to the ground three days later.

I had nothing to do with that event, I swear on the life of Mrs. Butterworth.

A totally opposite event happened on our recent trip through the Southwest.

We had pulled into Page, Arizona at about 8 PM. We were tired from a long day of visiting some National Parks, Monument Valley and the Four Corners Monument. We were hungry too. Checking with that annoying robotic and vocal search engine on the phone for a good place to eat in Page we were touted, “Big John’s (no relation) Texas BBQ.”

We had seen Big John’s on the way into town. My first thought was that it was having a gang fight. There was a big crowd outside the building and a lot of noise. It smelled great though.

We decided to drive past the place again and see if my first impressions were correct. When we pulled into a parking space we could see that the “gang fight” was actually a couple hundred people dining and dancing to a live band on Big John’s patio.

The sign outside didn’t say anything like “Brisket Served All Day” or anything. No shallow promises, no bait and switch signs in the window, just, “Big John’s Texas BBQ.”

I can give Big John’s a big sauce drenched thumbs up. It was really good. We sat at picnic tables next to locals and other visitors. There buckets of peanuts on the table with instructions from our waitress to, “Just throw the shells on the floor.”

My kind of place!

After our dinner (perhaps pulled pork nachos was not a good choice for that late in the evening.) we returned to our motel du jour” “Lulu’s Motel.” I know that sounds a little shady, but it was more than adequate for one night – and “No” it did not rent by the hour.

Signs like that first café proved disappointing. On the second café of that day it proved incendiary, but “Big John’s” sign made no promises. They didn’t even promise any napkins other than a roll of paper towels.

Then there are those signs that just defy understanding.

A few years ago in Cleveland, Ohio there used to be such a sign. It was emblazoned above the most confusing business I have ever seen.

Picture, if you will, a storefront window containing both Bridal Gowns and hanging Hebrew National Salamis. It made for quite a sight and some rather aromatic wedding dresses.

Lottie’s sign was honest – no deception or false promises there. Just something to cover both the wedding itself and the reception to follow.