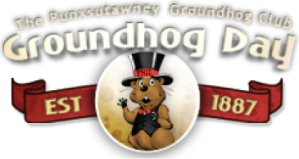 I JUST LOVE BLOGGING on holidays and today is no exception.

Having grown up in Western Pennsylvania I was taught, early on, that Groundhog Day was a Big Deal. It was right up there with July 4th, Labor Day, and the day that the new car models were unveiled by Detroit. Groundhog Day had implications for the rhythm of daily life, with just a spoonful of local mysticism thrown in. And the town of Punxsutawney was a combination of Stonehenge and Jerusalem – the nexus of everything Groundhoggish.

For 129 years the Grand Poobahs of Punxsutawney, PA have been trekking up to Gobbler’s Knob to awaken, grab and otherwise annoy a groundhog who goes by the name of Phil, and hold him up into the glare of paparazzo’s flashes and the blazing lights of Network TV. No wonder the animal is in a bad mood. I get grumpy if the trash pickup guys make too much noise in the morning. Just imagine my mood if I was manhandled like Phil? Not pretty.

Growing up I never looked at Groundhog Day and the winter prediction stuff as anything other than a predictor as good, if not better than, the Farmer’s Almanac. It was certainly better than the weather bozos on the TV. I took it all as a relative truth because I was told this by my relatives. Of course that included my great-Aunt Mary who also swore that she had seen snakes bite down on their own tails and roll downhill like Hula Hoops.

Making the pilgrimage to Punxsutawney was something I always wanted to do as a kid, but I never made it. For some reason February 2nd always seemed to fall on a school day.

I don’t begrudge this yearly event to the fine people of Punxsutawney. When it comes to tourist attractions in that area this is about it. It’s the groundhog or nothing and nothing don’t pay the rental on the top hats and tails worn by the groundhog annoyers.

While this event has been going on since 1887, there have been attempts to keep up with the times. Starting way back in 2013 the head groundhog pesterer began wearing a “hat-cam” to send the event out over the World Wide Web. If you are interested, and I don’t know how you could not be, you can check out the goings-on at http://www.groundhog.org/about/groundhog-day-webcast-and-videos . It ain’t Wikipedia, but then what is?

By the time this is posted you will have already missed this year’s to-do. They drag the critter out of his den at 7:25 AM so they can get primo coverage on the Today Show. So, I urge you all to go to the website, bookmark it for next year, and if you, sadly, have nothing better to do next February 2nd, you might wish to log in to see it live! If you do that you can then email me and tell me all about it, because I’ll still be in bed at 7:25 AM.