It Almost Brings Me To Tears

WHO SAID THAT TERRE HAUTE (THAT’S FRENCH FOR, “THERE’S ROOM FOR DANCING!”) is just another small town? Well…actually it was me once or twice. Truthfully, compared to some other places where I have hung my hat, it is rather small – about 60,000 humans and 12 million raccoons and squirrels.

It may be a “small” town, but it is crawling into the higher ranks one stumbling step at a time.

The latest positive move that is elevating this Metropolis on the Wabash (Not counting the resumption of lethal injections at the Federal Prison Death Row) is the grand opening of Starbucks Store #5. Five Chapels of St. Arbucks in a town of 60,000 people ain’t bad. That comes to one store for every twelve thousand bipedal Hautians. That is pretty good…except when all 12 thousand show up at the same time when I’m trying to find a parking space. 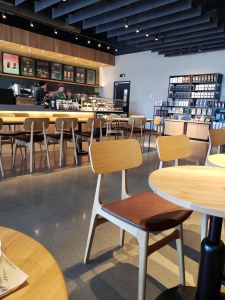 This newest St. Arbucks is not far from our abode and right by an exit off of Interstate 70. They will be getting a good amount of business from I-70 as well as from the two huge super-stores that are already there and crammed with thirsty shoppers. People will exhaust themselves going up and down endless aisles of stuff and then come trotting across the road to the new Oasis of Caffeine.

This new place just opened on the first of this month. I was there on that inaugural day at the request of the Starbuck’s District Manager – she seems to think that I am her Lucky Charm. If that is true then she is living on borrowed time because these stores will be around a lot longer than me.

I must admit that the new store is impressive. It is at least twice the size of my usual haunt. Some of their stores are so small you have to go outside to change your mind. Not so in this new place! It is large enough that you could have Ballroom Dancing Contests in there and still not feel crowded. I’m not much of a dancer, Ballroom or otherwise, but it would be something different from the occasional panhandlers that visit some of the other stores. The Dancers will be better dressed and have sharper footwork.

My usual (I’m hesitant to use the word “Normal”) routine is to hit the door at Store #3 at about 6 AM, get some writing done, chew the cellulite with the Usual Suspects, and then crawl home. That will not change. I just don’t trust my driving abilities at that early hour to go the extra two miles to the new Store #5. Visiting there will be saved for my afternoon iced tea runs.

The new store will get the bulk of that business from me. So far it is not very busy there so I can get some work done without too many interruptions. I need that hour or two block of time to knock out my daily 500-700 words. That total is dependent on the condition of my remaining creative brain cells.

Some days are better than others and then some days are worse. I’m happy if I can find a medium day or two now and then. It’s been working for almost four years now and who knows how long it will last before I have a Frontal Lobe blowout and I start writing “Valley of the Dolls.”

Me? I’m just trying to make it to the weekend – one cogent thought at a time.