This Is Not What I Had In Mind

THERE ARE MORNINGS WHEN I WISH HAD OVERSLEPT. If I was still unconscious I would blissfully miss things that, if awake, I would later end up regretting. Today I was up early.

As I sat there slumped over my coffee trying to find inspiration I was slowly surrounded by several members of the “Usual Suspects” who haunt the chapel of St. Arbucks. Normally, I could ignore them as they carry on, but this morning they snagged me.

At 7:30 AM it is nigh onto impossible to ignore two grown men standing in the middle of St. Arbucks comparing tattoos.  At first I didn’t know what they were doing. Why were these two fellows unbuttoning their shirts? Were they going to do a “Full Monty” right in front of me? If this kept on I was going to need a lot more coffee.

These two guys are both former (Not “Ex”) Marines and they both have a number of tattoos. I could see the ones on their arms easy enough, but now I was getting a look at the rest of the gallery.

“I have this one on my shoulder, but I have no memory of exactly where or when I got it.” 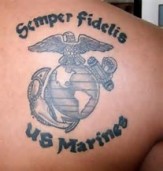 What condition must he have been in to be able to make such a statement? And I’m sure that he was heavily armed at the time.

Thankfully, they noticed that they were drawing an audience and stopped their free show before it degenerated into pole dancing. It was just too early and my stomach was beginning to curdle.

They continued to discuss their tattoos without the floor show, thank God. I don’t think I could have handled much more. The older of the two is my age and…Well; just use your imagination about where that whole thing was going. There were more tattoos that had not yet been displayed. I really didn’t want to look at his 50 year old Vietnamese tattoos.

I have no tattoos. I do not want to ever get any tattoos. If I were to ever even consider letting someone inject ink into my skin I would not let them cover me with images of Eagles, Anchors, The Battle of Bull Run, or my wife’s name lovely as it is. The only thing I might consider would be my name, address, and “Return Postage Guaranteed,” so I could, at least, be sent home. 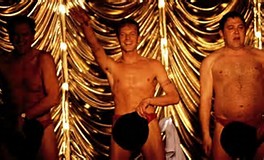 I have seen a lot of unusual things down at St. Arbucks, but this was the first time I ever had to worry about possible indecent exposure complaints.

On numerous occasions I have suggested to the Manager at St. Arbucks that having live entertainment might be fun. After this morning I think that idea might be dead in the water. I was thinking maybe a little bit of acoustic guitar or literary readings, but from now on the phrase “live entertainment” is going to conjure up images of 70 year old men stripping down to their tattoos.

One thought on “This Is Not What I Had In Mind”