The Dark Side Of Terre Haute 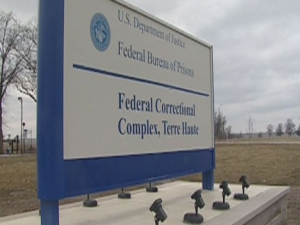 I HAVE HAD A LOT OF FUN with Terre Haute in this blog, with the silly French translations of the name (That’s French for “High Ground”) and some of the funny things that happen around here.

In reality, a place I occasionally visit, Terre Haute is a fine small city. It is a good place to raise your kids and has four institutions of higher learning that offer excellent educational opportunities.

I have been here since 2002 and, after living in the middle of big cities for close to forty years, the fact that Terre Haute moves at a more relaxed pace has allowed me to finally catch my breath. But Terre Haute also has a dark side that brings a heart-wrenching examination down on this otherwise caring and friendly city.

Terre Haute is the home of the Federal Prison System’s only Death Row.

On the western edge of town, along the banks of the Wabash River is the Federal Prison. There are about 1600 people in the inmate population. Of these, about 60 are lodged in the High Security Death Row wing.

This is where you can find a collection of terrorists, drug kingpins, and murderers.

Terre Haute is where Timothy McVeigh, convicted of the Oklahoma City bombing, was held and executed in 2001.

It is where Dzhokhar Tsarnaev, recently sentenced to death for his part in the Boston Marathon Terror Bombing, will probably be sent to be executed by lethal injection.

Having these people in our midst is not something that the “Hautians” talk about very often. We know that they are there. We know what happens there. We know people who work there. So be it.

Whether you are in favor of capital punishment or not really isn’t the issue. The issue is that every time we drive past the prison it reminds us of the evils of the world and how, no matter where you live, they reach out and touch you.

Do I wish that the prison was someplace else?

Hey, everybody’s gotta be someplace. It is what it is.

A man wearing his prison work clothes just came into the Starbucks where I am sitting. He had his sidearm in his holster. He also had his wife and young son with him. He held the boy’s hand as they walked across the busy parking lot.

It is what it is.

Not long ago this blog had a posting about a woman and her family who survived the Oklahoma City Bombing and was living in Terre Haute. I never asked her how she felt about having the killer of her two children living just a five minute drive away. I honestly don’t know how she would have answered me.

I urge you to reread it.

There are days when I see the prison and I think that it doesn’t look like a prison, but a college campus. Then I see the razor wire and the guard towers and all illusions disappear. It is not a school. It is a place filled with violent and dangerous people who have earned their presence there.

I feel no pity.

Do I wish the prison was someplace else?

Yes and No. Every day, but it is what it is.