Archive for the category “Subway”

“One Person’s Trivia Is Another Person’s McRib”

SOMETIMES THERE IS A BENEFIT when the conversation takes a turn to something boring. This morning over coffee one of the Usual Suspects started to talk politics. My brain glazed over and my eyes began to wander. It was then that I saw a teeny-tiny online mention of no import.

Sonovagun. I never would have guessed it was that many.

While voices muffled by politics faded in the background I read on.

The newest nation to allow Ronald the Clown to cross their borders is – (Fanfare!)

END_OF_DOCUMENT_TOKEN_TO_BE_REPLACED

I’M FEELING CROWDED THIS MORNING. I’m feeling that way because I am being crowded today. On most days at 6:30 AM I have my writing corner all to myself, but today for some reason, this is the most popular place in town. Is St. Arbucks giving something away for free today?

With the crowding comes noise – People Noise. The usual background noise in the morning is made up of cars and trucks driving past, but this morning I can’t even hear the traffic going by. Instead all that I can hear is the people sitting at the next table. Three people all trying to talk at once. They are all so excited. Why I can’t understand. They are all jabbering about Real Estate. Not a topic I would usually associate with such unbridled excitement. To each his own I suppose.

END_OF_DOCUMENT_TOKEN_TO_BE_REPLACED

One Person’s Trivia Is Another Person’s McRib

SOMETIMES THERE IS A BENEFIT when the conversation takes a turn to something boring. This morning over coffee one of the Usual Suspects started to talk politics. My brain glazed over and my eyes began to wander. It was then that I saw a teeny-tiny mention of no import.

Sonovagun. I never would have guessed it was that many.

While voices muffled by politics faded in the background I read on.

The newest nation to allow Ronald the Clown to cross their borders is – (Fanfare!)

I do have to admit that my knowledge of Kazakhstan is rather limited, but as a McDonald’s stockholder for the last 30+ years I feel obligated to learn what I can. So, here goes.

Kazakhstan is the largest landlocked nation on earth (ergo: not much of a navy).

It has a population of about 18 million souls, and now, 1 McDonald’s.   The Capital city is Astana. The President of Kazakhstan is Nursultan Bazarbayev. He is generally considered to be an authoritarian ruler (read “dictator”). It is unknown at this time whether or not he likes the McRib

That’s it. That’s all of the relevant information about Kazakhstan I could dig up.

McDonald’s, with its new restaurant in Kazakhstan, has well over 36,000 sets of Golden Arches worldwide. They employ 1.9 million people. I would wager that most of them are either teenagers, senior citizens, or people who were just not Taco Bell material. I may be wrong, but my personal observation of the McD’s here in Terre Haute (That’s Kazakh for “Where’s my Shamrock Shake?”) tell me that I’m not wrong.

In my own personal experience I have been in McDonald’s all over this country and in Ireland. I have no intention of trying to visit all of them. There are people who try to do that, traveling all over the map in a quest to visit them all. These are people who will eventually work at McDonald’s. Who else would hire them after looking at a resume with a twenty year gap during which they ate breakfast, lunch and dinner next to Ronald the Clown.

In an effort to gather information for this snippet of reality I went to the McDonald’s Corporate website to learn more about their worldwide operations. Fascinating.

McDonald’s has blanketed Europe. There are more than 50 Mickey D’s in Ireland. While I’m there (leaving for Dublin in just a few days) I may visit one to satisfy my need for fries (chips), but I think we will eat at home most days.

I learned that there are 11 McD’s in Lithuania, ancestral home of my mother’s side of the family. Europe is definitely well served.

The one glaring gap on the world map is on the continent of Africa.

There are about 23 McDonald’s in Egypt – more than I expected.

There are 200 stores in South Africa. That is way more than I would have guessed.

That’s it. Egypt on the north coast of the continent and South Africa at the other end. In between – nada.

If you live, let’s say in Burkina Faso (another landlocked country) and you have a craving for an order of Chicken McNuggets – you are SOL – Snack Out of Luck. You are going to have to hoof

it across the Sahara to Egypt or, if you’re not in a hurry, pack a sandwich and head south, way south.

I admit that I have not delved deep into the subject to determine if there might be a Burger King or even a Subway (Sans Jarrod) in Burkina Faso. If there is – all I can say is “You deserve a break today. Boy, do you ever.”

THIS MORNING DOWN AT ST. ARBUCKS the Usual Suspects were deep in conversation. The Heavily Caffeinated Philosophers were arguing about which fast-food chain had the most stores. One said it was McDonalds, another suggested KFC. At least they weren’t discussing something trivial.

END_OF_DOCUMENT_TOKEN_TO_BE_REPLACED

So Much For That Idea 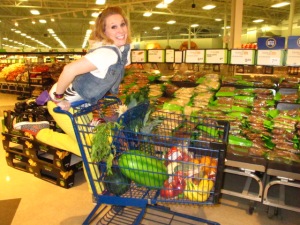 JUST YESTERDAY I SHOWED FIRM RESOLVE to not go out to the new Mega-store that just opened. I said that I would wait a month or so.

I must amend that timeline to read, “I’ll wait five hours or so….”