Archive for the category “Groundhog Day”

This is the last Friday in January. Groundhog Day is officially next Tuesday and I have no intention of doing anything on that day that might be considered work. So…

Here is a repeat of a Groundhog Day post from a few years ago. It was a tragic and bloody day. Everyone knows that Groundhog Day makes sense only in a small town in the hills of Pennsylvania – not in New York City.

Unless you live in Punxsutawney, Pennsylvania today is just another Friday. If you do live in Punxutawney, Pennsylvania then this is the one day in the year that anyone gives a hedgehog’s patoot about your town. Today is the day when the Network Morning Shows will give you a 90 second live cutaway to see the annual Groundhog ceremony…and then that’s it until next year.

END_OF_DOCUMENT_TOKEN_TO_BE_REPLACED

Throwback Thursday From October 2016 – “A Treatise on Lunch”

WHY I THINK OF SUCH THINGS I DO NOT KNOW. I certainly could find a better use for my remaining brain cells. There are days when I worry that my gray matter is slipping away by the cup full. Those days are usually Mondays.

The substance of my obsessive thoughts for today is: Lunch

END_OF_DOCUMENT_TOKEN_TO_BE_REPLACED

Now He Belongs To The Ages

Pizza! Food of the gods! A seven course meal all on one slice! The Ultimate Survival food for when the Zombies attack!

But who can eat just one slice? Nobody I know.

Last night the whole Texas clan gathered around the dining room table and ate like there was no tomorrow. There was Meat Lovers Pizza, Pepperoni Pizza with extra cheese, Pepperoni Lovers, and Chicken with Bacon and Buffalo Sauce Pizza.  That was good for starters. Along with the big square boxes there were other boxes filled with Garlic Breadsticks, Cinnamon Breadsticks, some rather odd Potato thingies, and some little apple pie-like pastries. Oh, yeah, and two gallons of iced tea.  Gotta love those “Meal-Deals.”

END_OF_DOCUMENT_TOKEN_TO_BE_REPLACED 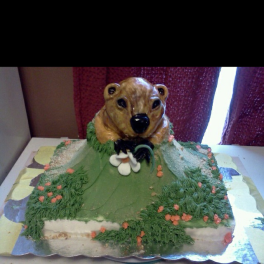 A COUPLE OF YEARS AGO IN NEW YORK CITY the Mayor decided that he needed some positive coverage in the media. His idea was to stage his very own Groundhog Day Festival. Whatever Punxsutawney, PA can do, the Big Apple can do better – or so he thought.

At the Staten Island Zoo, not exactly the best known zoo in America – or even in New York City for that matter, Mayor Bill de Blasio (The name he is currently using), with much fanfare and with cameras rolling, was handed “Charlotte the Groundhog.” 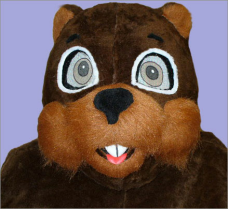 The Mayor was obviously not an experienced Groundhog Wrangler and Charlotte may have taken his fumbling and groping as an improper advance. Charlotte squirmed, the Mayor went sissy, and dropped Charlotte. It is unknown if Charlotte ever saw her shadow on the way down, but it is for sure that she hasn’t seen much of anything after she hit the pavement.

Last year (2015 for the chronologically challenged) the Mayor agreed to try the event again, but he refused to touch the replacement Groundhog – “Chuck.” It is quoted that the Mayor greeted the suspicious Groundhog by saying, “What’s up, Chuck?” Now that Charlotte has gone to that Great Groundhog Lair in the Sky I doubt that Chuck took much consolation from, “What’s up, Chuck?”

The New York Times noted the occasion of the Mayor’s return to the zoo with the headline, “Mayor Bill de Blasio Did Not Kill the Groundhog This Year.”

There was so much sarcasm dripping off of that headline the paper should have come with a roll of paper towels.

There was another Mayor vs. Groundhog encounter last year in Sun Prairie, Wisconsin. The Groundhog picked for their show was in no mood to fool around with some strange humans. When the Mayor picked up “Jimmy the Groundhog”
the unhappy rodent took a chunk out of the Mayor’s ear.

This year the Mayor has already announced that he is not going to have anything to do with actually touching the Groundhog. I bet that “Jimmy” is cool with that.

He probably heard about what happened in New York.

The Word spreads about Charlotte

I imagine that both of these Mayors are now Groundhogaphobic after their bad experiences. Imagine how the Groundhogs feel. Every February 2nd their sleep is disturbed, they are grabbed and shoved in front of crowds of humans. There are bright lights, yelling media types, and all without so much as a “Please” or “Thank you.” In the human society that kind of stuff is called either a “Home Invasion” or the arrival of the SWAT Team – and often gets people shot or arrested.

The people in Punxsutawney have been doing their thing for over a hundred years and they have it down pat. The rest of these clowns are the worst kind of amateurs – they think they are cooler, smarter and more capable than the experts. And what happens? Groundhogs die and Mayors qualify for Vincent Van Gogh Look-Alike contests.

Charlotte  — taken by the Paparazzi

Yo, Ho, Ho, And A Bottle Of Eggnog

BEING THE COMMITTED CHEAPSKATE THAT I AM I have given up a number of expensive hobbies in favor of others that are cheap – like me.

I used to drive in Sports Car Road Rallies and for a while I flew Sailplanes – two ways to burn up income faster than was rational. Now that I’m retired I have taken up the cheapest of all hobbies: People Watching. I wish I had started doing this years ago. It would have saved me a lot of money and rescued me from a diet heavy on Ramen Noodles.

END_OF_DOCUMENT_TOKEN_TO_BE_REPLACED

I Think I’ll Have Some More

A COUPLE OF WEEKS AGO I asked for suggestions about where we should go for a right fancy Thanksgiving feast. It has been our tradition to go out for our Thanksgiving dinner, but our usual buffet spot is closed for remodeling.

We got several good tips and a couple of wiseacre suggestions too – and thanks for the invitation to join you for dinner, but India is farther than I care to drive.

END_OF_DOCUMENT_TOKEN_TO_BE_REPLACED

A COUPLE OF YEARS AGO IN NEW YORK CITY the Mayor decided that he needed some positive coverage in the media. His idea was to stage his very own Groundhog Day Festival. Whatever Punxsutawney, PA can do, the Big Apple can do better – or so he thought.

At the Staten Island Zoo, not exactly the best known zoo in America – or even in New York City for that matter, Mayor Bill de Blasio (The name he is currently using), with much fanfare and with cameras rolling, was handed “Charlotte the Groundhog.”

END_OF_DOCUMENT_TOKEN_TO_BE_REPLACED

Groundhog Day – a cherished annual celebration with no real meaning other than the fact that it is done every year. Kind of like Election Day.

The ostensible reason for Groundhog Day is meteorological – predicting the weather by dragging a hibernating rodent from its den and observing if its shadow is visible or not. Anyone could predict the outcome of that by looking up instead of down – Sunny = Shadow. Cloudy = No Shadow.