My Childhood In The Distant Past

I was born in 1946 in Cleveland and raised in a small town in the hills of Western Pennsylvania and, in many ways, I lived a childhood rooted in the 19th century. Whenever I tell someone of my daily life they react as if I was telling them a story about an earlier time. They find it hard to believe when I tell them that my mother bought her fruits and vegetables from a man with a horse drawn wagon, we had bearded hobos knocking on our door for a handout, and quarantine signs on our front door whenever a kid got one of the many childhood diseases.

When I moved from The Valley to go to college in The Big City people were amazed and amused when I told them about The Pony Man.

There were few times more exciting for the neighborhood kids than those days when the old wooden wagon piled high with fruits and vegetables and pulled by a pinto pony came down the street. The Pony Man’s name was Carmine and the pony was Tony. My mother would make her selections and drop her money into the basket that sat on the seat next to Carmine. Business concluded Tony would move on to their next stop. Tony knew the route by heart.

A remnant of the Great Depression were the Hobos who “Rode the rails” from coast to coast looking for work. Many of them had been wandering for decades unable to leave the life on “The Road.” Our house was just two blocks up from the river and the main railroad tracks that carried passengers and

freight up and down the Valley. It was not unusual for a Bearded Hobo to knock on our back door looking for a handout and/or an odd job. My mother was a soft touch and handed out a lot of sandwiches. I once found this symbol scrawled on a tree near the house. It meant that a nice lady lived there.

There were also “Tinkerers” who would walk through the neighborhood shouting out “Knives sharpened! Pots Fixed!” Tinkerers were itinerant repairmen, the original “Jack of all trades” workers. They would help the neighborhood Mothers by pounding out dents in their pots and pans and grinding the kitchen knives sharp again. Those were not throw-away items.

Given recent events in our world most people are seeing the word “Quarantine” for the first time. I grew up seeing that word a dozen times a year.

In the 1950s there were a number of highly contagious diseases that were often called “Childhood diseases.” Measles (3 different versions), Mumps, Chicken Pox, and others would sweep through every

year and the local Board of Health would try to control the diseases by posting “Quarantine” signs on our front door. It meant that no one got in or out of that house until the disease had run its course. My father had several bouts of staying in local motels while I and my brother were sick.

In the Summertime the Quarantine was sometimes violated on purpose. When the word got around that a kid had measles or whatever the neighborhood mothers would throw a “Measles Party” to deliberately expose their kids to the disease just to get it over with before school started again in September. It was somewhat perilous, but effective.

A child’s life in those days in my small town was certainly different. It was a much simpler time in many ways than today. However, it also had its own terrors that no longer exist. Every Summer there was the looming fear of another epidemic of Polio, a disease that is rare today thanks to two men names Salk and Sabin.

I could tell you more stories of my childhood in the time-warp Valley where the modern world collided with earlier days when everyone knew everyone else, your child’s milk came to your door in glass bottles and three cents would send a letter across the country.

Perhaps I will. Let me know what you think I should do. 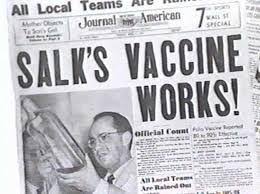 20 thoughts on “My Childhood In The Distant Past”