Enlightenment Is Not Always There

WHEN THE LIGHTS GO OUT IT GETS DARK, RIGHT? You have no idea what dark is until you’ve been in a power failure sitting on a cliff looking out at the Atlantic Ocean at night.

Last night there was a real doozy of a very windy storm here on the northwest coast of Ireland. The sheep on the hillside were holding on for dear life. One wrong step and they would be airborne all the way to Scotland.

It was at about 8 PM when things began to get strange. The wind was already blowing and our lights started flickering. They would throw us into darkness for just a second or two then come back on. That was enough to turn off the TV and make the Alarm System twitter and flash. This happened three times until, at almost 11 PM straight up, the lights went off and didn’t come back on.

Midnight in a coal mine? A bit dim in comparison. The dark side of the moon? A good place to get a tan. A Banker’s heart? Put on your Foster-Grants. When the lights go out in Glen Columbcille, County Donegal, Ireland you are truly LEFT IN THE DARK.

What can you do when you find yourself in that situation? Why, you have a late dessert by candlelight. What could be better than some chocolate cake with strawberries and whipped cream? It all seemed perfectly reasonable to me.

While we sat there eating our cake we amused ourselves by focusing on the one shining light in our world – the lone light shining on the mast of a sailboat that had slipped into our little cove seeking shelter from the turbulent ocean. 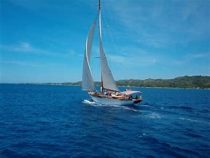 A few hours before the lights went out a sailboat, estimated at about 26 feet long by one of our Alaskan Cousins who knows more about boats than I know about…about…about anything sane, pulled into our cove and dropped anchor. They knew that it was going to get ugly and found refuge inside the crash of the wind and waves. I would not want to be on a boat like that in good weather, but with the wind howling and waves slamming into the rocky shoreline, you would have to shoot me first.

When the sun went below the ocean horizon it got dark in a hurry and when the power went out things just disappeared. The only light, aside from our cell phone flashlights, was one seriously bobbing light shining on the top of the boat’s mast. It was like a single drunken firefly flying in the dark.

Once the cake was gone and the batteries on our phones were fading it became obvious that our next step was going to be heading off to bed. It was now close to midnight and sunrise was a long way off.

I crept my way to bed, got into my jammies, and crawled under the comforter. I was gone in moments. As is part of my usual night I woke up at about three AM and, lo and behold, the lights were on, so my tippy-toeing to the bathroom was not done by Braille or a hit and miss walking into the wall.

The next time I opened my eyes there was sunlight streaming through the big, ocean facing window in the bedroom. There was power so all of the food we’d purchased the previous afternoon would survive. The sailboat was gone. They had sailed off into the sunrise. I hope.

I now know what true darkness is like. It’s…dark.

Take my word for it.

6 thoughts on “Enlightenment Is Not Always There”