A BROKEN STRAW –A METAPHOR FOR MY LIFE.

Even though I am more or less retired I still find Monday to be a toxic spot on my calendar. This past Monday morning was no exception.

For some unknown reason I woke up at about 4:30 AM and could not get back to sleep. So I grabbed a pair of sox and started from there to get dressed and go get some coffee. All I can figure is that I must have either nodded off or I was kidnapped by Space Aliens and returned to my bed 90 minutes later. I felt no evidence of “probing.”All of the proverbial sudden it was 6 AM and I had one sock dangling from my right foot.

I finished dressing and completed my morning obligations (Making a pot of tea and gathering my morning meds) and steering the Toyota down the street to St. Arbucks. I was on the verge of Psychic Collapse.

When I stumbled on my way through the door I took it to be a bad omen. The young Barista was two steps ahead of me. She asked me if I wanted my usual Iced Coffee. My usual is “My usual” because that is what I “usually” ask for. I don’t know why she bothered to ask me that. I mumbled something under my breath. I don’t know what, but it triggered a response from the Barista.

“Do you want a refill on that?”

I took in that informative query, analyzed it, digested it, and expelled it neatly.

“Yes, but can I have the refill first?”

I don’t know why I said that. It made less than no sense. That didn’t occur to me, but it did to the Barista. She looked at me. Her eyes glazed over and a look came over her face. I could read that look. It said, “I could have gone to Cosmetology School.”

She had a point there, but I’m not sure that either of us recognized it. After all it was barely 6 AM and we were both sleep deprived.

In a couple of minutes she shoved my iced coffee across the counter at me without saying a word. Not one. Without wasting another second of having to interact with me she handed me a straw – one of the standard green plastic straws. I mumbled again and careened my way through the inaccessible “Handicapped Accessible” tables and chairs to my spot in the corner. I peeled the paper off of the straw and pushed it through the plastic lid. 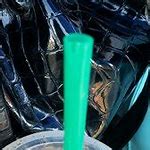 I didn’t have any high expectations at that point. All I expected was coffee swirling in my mouth. I slapped my lips on the straw and sucked. Did I ever? Nothing happened. Less than nothing. All I got was air, but I certainly got no coffee. My first thought was that I was so weak from lack of sleep that I couldn’t even suck.

Can you imagine what that does to a persons ego?

I tried it a couple more times before it dawned on me that maybe it was the straw that sucked. I pulled the green plastic straw out of the cup (Which probably made the situation worse) and looked for the flaw that caused the nonsuckability of the straw. I found nothing but I knew that it had to be there. I put it back through the lid and gave it another try.

Nothing. It sucked without sucking.

By this time people were beginning to stare. I stared back. I don’t take that from anybody at that time of day.

At last I just gave up. I got up and crossed the store to get a new straw. I looked over at the Barista who had given me the first straw. She was following me with her eyes looking like she might bolt for the door if I turned her way. All I did was silently mouthed the words “It doesn’t Suck” in her direction. She turned around and walked away. I don’t know what she thought that I’d said, but she wasn’t looking happy.

This was how my day started. How was yours?

2 thoughts on “The Last Straw”