Do You Feel Lucky?

OH BOY! GOODIE! GOODIE! It’s that time of year again: the itinerant fireworks peddlers are back in town! Let’s all go out and visit those temporary stores and tents, buy some fireworks, and then kiss our thumbs goodbye.

Every year just like clockwork and the sprouting of poisonous Deathcap Mushrooms these fly-by-night emporiums of explosives and amputations show up in our environment. Striped tents are popping up in Parking Lots across the land. 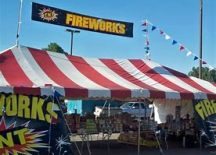 These vendors always have the oddest Sale Prices. I can understand “BOGO” – Buy One Get One, but “Buy 1 – Get 15 FREE” just seems a bit desperate. Like they are trying to “Get Rid of the Evidence.” Even so…what am I going to do so many of whatever it is I’m getting 15 of? As soon as I set off Explosive Thing Number One every dog and cat within five square miles will become terrified to the point of wetting themselves and spend the next week living under the bed. That and there is the possibility that I might accidentally set fire to the neighborhood.

Where and When I grew up (Pennsylvania, The Dark Ages) these fireworks were incredibly illegal. I have never handled anything more volatile than “Sparklers” (and the odd actress) and I burned myself on both of those more than once. These temporary tent stores are selling stuff that could turn Costa Rica into a World Power. I have looked at the items for sale in those tents and there are things in there that could have helped the Allies liberate France over the weekend. Turn General Patton loose in one of these stores and there would not have been a “Battle of the Bulge.”

Whenever these merchants show up they must be getting some sort of permits from the local municipality to operate. Nobody in their right mind would give them the OK to literally pitch their tent without some sort of inspection. I tell you – I’d love to go along on one of those permit inspections. How much confidence can you have in a fireworks purveyor who has one eye, only three fingers on his left hand…and is named “Lucky?”

My wife, the lovely and pyrotechnic, Dawn, grew up around fireworks in Texas. She knows no fear around them, whereas that is all I know when it comes to these fireworks thingies.

A few years ago Dawn decided that we needed to launch a few to celebrate the 4th of July. We and a few guests who were either brave or overly trusting were sitting around in lawn chairs by the garage when Dawn brought out her version of the V-2 Rocket…several of them. 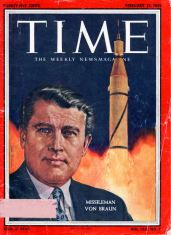 The first two went off perfectly zooming straight up and detonating high above the house. She set up the third rocket and lit the fuse. That was when even Werner von Braun would have blanched. A slight gust of wind hit the rocket and knocked it over. A microsecond later it took off horizontally straight toward one of our guests relaxed in his chair. To be honest, I have never seen a human being move quicker than our friend Joel on that warm Summer evening. He was up and out of that chair faster than any Marvel Superhero. He knew that the rocket was headed straight for his future children and his reflexes saved his family tree from being clear-cut in our driveway.

So, if you want to buy some strangely legal fireworks here in Terre Haute (That’s French for, “Has anybody seen my fingers?”) the “Get ‘em while you can” fireworks vendors are back in town. All I ask is that you don’t shoot them off in my part of the ‘hood. Our neighbors are still a bit skittish.

2 thoughts on “Do You Feel Lucky?”