AUTO RACING IS BIG, VERY BIG IN INDIANA. This year it is even bigger.

The reason is that this year is the 100th edition of the Indianapolis 500 race. This year, as in every other year, 33 cars will tear around the 2.5 mile track for 500 miles – turning left the entire time.

If there is one thing the owners of the race know how to do it is to get publicity. For this year’s

race they pulled out all the stops. We saw ads and TV sports stories about the race while we were in Ireland. That is some big time publicity. A couple of days before the race I heard an interview with one of the race officials (I’m not sure what the job description would be for that kind of job.). He said that they expected a turnout of 360,000 people to be in attendance at the track. That is approximately six times the population of Terre Haute (That’s French for, “Did you see the line for the Porta-Potty?”) That figure is a record crowd and is considered a “sell-out.” Because of that the race will, for the first time I believe, be broadcast live on local TV.

Indianapolis is a big city. It has a large supply of hotel space, but with 360,000 people showing up for the party, finding a room was not easy. Terre Haute is about 65 miles from Indy and the track, but every hotel in this town was booked solid all week. The local airport saw a number of private jets coming in carrying race fans.

On the Friday before the race I stopped in at St. Arbucks for the early services, AKA coffee brewing and get together with the Usual Suspects, and had trouble finding a parking space. Once inside I could see that the joint was packed to the walls with strangers (stranger than usual) and the Baristas were sweating even though the AC was cranked up to the max.

Once I got my coffee I was able to watch it all strictly for the entertainment value – people jostling each other in the Ordering line and while waiting to Pick-up. Things got really dicey in the parking lot as some yutz in a BMW SUV (a shameful

combination) tired of looking for a parking space and just got out of his monster truck wannabe and came inside. It almost came to blows with a guy in a rusty pickup truck who took issue with the entire mess. Such Fun!

All weekend long it was hard to find a table in any restaurants in Terre Haute. Wait – let me qualify that – any restaurant that didn’t have a drive-thru window.

I’ll be glad when it’s all over and done. I have nothing against the race. While I am not a fan of auto racing (I prefer Rallying, having done that for several years) I can understand (almost) the

allure of going 200 mph while turning left. It’s just not my cup of iced tea.

I do have to admit that the entire situation in town was aggravated by the fact that one of the local colleges was having its graduation ceremonies the same weekend. The folks in town for that were better dressed and calmer.

Until everybody left town after the race I tried to keep a low profile. With all of the hub-bub and folderol it made Terre Haute feel, for just a few days, too much like a big city filled with tourists – sort of a gasoline fueled Fisherman’s Wharf – without the Mimes. 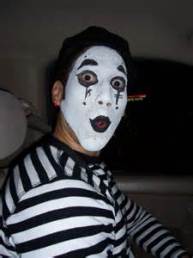