Throwback Thursday from May 2016 – “Don’t Take Me Wrong Folks”

Throwback Thursday from May 2016 – “Don’t Take Me Wrong Folks”

I THINK IT’S TIME FOR A FEW OBSERVATIONS about Ireland. Of course, none of these are all that important and not meant to denigrate Ireland or its people. It is all just things my warped mind has noticed.

I have noticed that wherever we have stayed there are modern, state of the art appliances – except – for the microwave ovens. We have washer/dryer combos that you need to be a NASA physicist to understand and really neat convection ovens that double as Bessemer Furnaces for making steel. When it comes to microwaves it is like stepping into a time warp back to the 1990s. They work fine, but, seriously, when was the last time you used a microwave where you had to set the time and power level with dials.

This is not our first time in Ireland and the Irish are friendly, helpful, and very understanding of our American quirks and I try to do the same with their idiosyncrasies and ideas.

One of the most traumatic and history changing times in this nation’s life were the years of the Great Famine. Just before the potato blight destroyed the economic and social structure of Ireland for the first time in the 1840s the population was over 8 million people. A million people starved to death, another million fled to other countries, the U.S. taking in huge numbers. Even today, 175 years after the first famine hit, the population of Ireland has not recovered – sitting at about 6.5 million souls.

The reason for this short history lesson is that the other day my wife, the lovely and ever on top of her history, Dawn, and I visited the National Museum of The Great Famine. It is located in Strokestown on the grounds of the former British Lord who had his plantation and large numbers of sharecroppers and land lessees. When those Irish workers were unable to turn a profit for the Lord or pay their rents to him he evicted them, destroyed the shacks where they slept and left them adrift in the midst of the road. With others, he sold them (there is no other word) onto emigrant “Coffin Ships” bound for American shores.

So – today 135 years since the last total crop failure – the Famine is a sensitive issue.

And that is where My Observation enters –

There we were at The Nation Great Famine Museum and taking all of this in about starvation and cruelty, and what did we do? 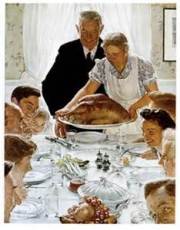 We sat down with a seriously overloaded plate, filled to overflowing, with turkey with bacon, carrots and three scoops of potatoes with gravy. There was enough for at least two people on my plate alone.

I just found this lunch, and the idea of a café at all, as a part of the Great Famine Museum, to be in questionable taste (no pun intended), and ironic to the Nth degree. But who am I to argue – it is their country and their history.

The turkey was excellent, by the way.

My last observation is not nearly as important, except on an intimately personal level.

I have noticed that the Irish are really into conservation, making things have multiple uses, and recycling. I’m cool with that, but I think they may have stepped over the line when you have Irish toilet paper that can also find service in the woodworking shop as the business end of your belt sander.