TALK ABOUT PAINTING YOURSELF INTO A CORNER…Whew!

This morning (a few days before Valentine’s Day) I was stumbling into St. Arbucks for a transfusion with a little Half-n-Half when I saw a poster advertising a weekend concert. Whoever put it up was careless and posted it sideways on the bulletin board. The concert featured a singer doing a Frank Sinatra Tribute Show.

That singer is a performer whose Show Business career is firmly rooted in “The Law of Diminishing Returns.” 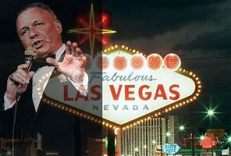 Impersonators, your audience is either Dead or on Life Support. Being an Impersonator is a tricky business – Show Bizwise. You have to pick your shots. Yes, there are a ton of Elvis Impersonators, but (let’s be honest) that is the manifestation of a mental illness. Heck…here in Indiana we have a State Legislator who is an Elvis Impersonator on weekends. I rest my case when it comes to the multitude of “Elvii.”

This fellow who is doing the Frank Sinatra tribute is probably a habitué of every Karaoke Bar this side of Nagasaki. Where else could you rehearse and develop your songlist?

I don’t have any plans to attend this “One Night Only!” Show, but I’ll bet that it will not have any live musicians involved. It will be a glorified Karaoke Night at the Dew Drop Inn.

I don’t imagine that my wife, the lovely and musically adept, Dawn, and I will be there for a multitude of reasons – Complete lack of Interest being a big one. Cost is another reason.

Remember – this performer is NOT Frank Sinatra. When I saw the ticket prices I began to suspect that he might be thinking that he really IS the late Mr. Sinatra.

If you really want to be there, basking in the Aura of Pseudo-Frank you can plunk your cheeks down in the “Sinatra VIP Section for only $600 a table or $75 per person. If that is a bit pricey for you – try the “Rat Pack Section” for $400 a tableload or $50 a seat. If even that would be eating up the rent money – go for the “Back of the Pack Section” at $300 a table or a mere $37.50 for a seat on a three-legged milking stool. At those prices I want a dinner and a bottle of Champagne and I want it in Las Vegas.

A stranger who saw me looking at the poster asked me if the singer really looked like Frank Sinatra. I told him that I hoped not – after all – Frank Sinatra has been dead for more than twenty years.

I wish I had heard about this concert a few weeks earlier. I would have been able to alert you all, just in case you wanted to book a flight to Terre Haute (That’s French for, “Do Be Do Be Do”).