HAVE YOU FINISHED YOUR CHRISTMAS SHOPPING YET? If you have I raise a glass in your honor. Please understand that “Finished Shopping” doesn’t mean getting a bunch of Starbucks Gift Cards on Christmas Eve. Serious shopping means getting down into the trenches at The Mall or the big Wally World type stores. “Shopping” isn’t shopping unless you’ve had your feet stepped on at least twice and had a possible gift ripped from your hands by a wild-eyed, liquor-fueled, grandmother. Shopping in The Mall isn’t complete until you’ve seen some little rugrat puking all over the Temp Agency Santa Claus.

I’m not a Scrooge or anything, but I just can’t get all worked up about the Holidays like I used to. I think the glow went off the Baked Ham once I reached sixteen years old and the toys under the tree began to be supplanted by new socks and a prescription for bifocals. After that nothing I got ever needed batteries. Those gifts were not fun. I liked the things that needed batteries.

These days with the Internet taking over our lives the entire idea of how to go shopping has changed completely. Nothing I buy for gifts will ever have my fingerprints on it.

Shopping online is an exercise in anonymity. There is Amazon, but there are other online sources that have their own identities (but I suspect they are really Amazon in disguise). They are like Santa in that they only appear at Christmas. 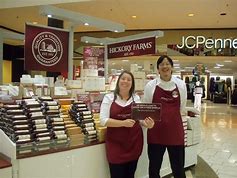 For eleven months of the year who ever hears from “Omaha Steaks?” I never see their ads during baseball season. Where does Hickory Farms go after New Year’s Day? Where do they stash all of that sausage until next Christmas? I wouldn’t even begin to guess where to find those “Isotoner Gloves” in July. They are all a mystery to me.

When was the last time you saw an ad or got a catalog from the “Fruit of the Month Club” outside of the Holiday Season? I’m not much of a “joiner” anyway, but I don’t want to be getting Guavas and Pineapples from the UPS guy. If I feel the urge to nosh on a Papaya in August I’ll go down the street to the Kroger store and get one. I don’t want one that has been kicked from state to state on its way to me. 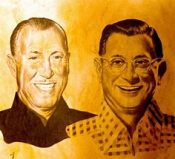 We just got a catalog from two guys named “Harry and David.” I don’t know who they are or why I should be buying pears from them. Buying food online seems to me like going through the supermarket blindfolded. It might be fun, but you might end up with a cart filled with garbage. At least “Harry and David” don’t sell Tootsie Pops or I might be seriously tempted.

At the start of this posting I asked if you had finished your Christmas Shopping. I haven’t even started mine.

I have a few of those catalogs stashed away and I think I’ll start cruising through them tonight. I will not be buying any steaks from Omaha or any Fruit for this or any other Month, but I do have to admit those Isotoner Gloves are looking pretty stylish.

5 thoughts on “Gift Wrap This”