There Will Be A Tomorrow

I HAVE BEEN MOST FORTUNATE. I lived in California for 25 years and never had to directly deal with the tragedy of wildfires. The closest I ever came was the horrible Oakland hills Fire in the early 1990s. That fire was across the Bay from me, but I did have coworkers who lost everything – escaping with their lives and the clothes on their backs.

Now with this latest fire season we have a friend who is facing that same experience. Our friend, a young Minister, is the Pastor of a church in Paradise, California. The latest updates from that area are saying that Paradise is – gone. We know that he and his wife escaped, but the church is gone. We assume that their home nearby is also lost, but there is no way of knowing for sure yet. Paradise will rise from the ashes, a small town 180 miles northeast of San Francisco, but it will take resolve and hard work.

California is a big place. From San Francisco down the coast to LA is well over 400 miles. Much of California is rural. When you have almost 40 million people living there and 35% of the land is forested bad things can happen. Human carelessness causes many, if not most, of these terrible fires. People like to live close to the beautiful forests, but the two do not always mix well. 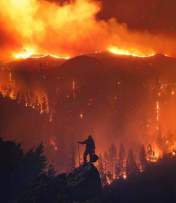 We are praying for the people affected by the California wildfires. It is hard to comprehend the size and power of these fires. They create their own weather and are not stopped by roads, farmland, or towns.

The fires are a natural phenomenon. Fires would happen every year even if there were no people present. Old growth burns to make way for new growth.

The sky glows at night visible for miles. The smoke can also be sensed miles away from the actual fire. The fires are like blazing tsunamis that move, inundating everything in their path. Humans can fight the fires, but it can take the inevitable rains of winter to finally extinguish them.

At the latest reports that I’ve heard say that the fire that swept through Paradise is 0% contained. It has been burning for a week and there is no end in sight. The fires in the LA area are not much better. The fires are not impressed by the presence of people. Houses and towns burn just as well as trees and brush.

California is about 800 miles from north to south. It runs from seashore to snow covered mountains.

Verdant farmlands to scorching deserts are parts of the climatic picture. There are forests from the Oregon border all the way south to Mexico. There are big cities, but there are more small towns and even villages that people call home. The mountains are dotted with these small towns in the middle of the forests. Beautiful and vulnerable. Towns like Paradise are wonderful places to live, but they are also tinder when things go wrong.

We are anxiously waiting to learn the fate of the towns and people still in the path of the fires. We pray for their safety and mourn for their losses. We celebrate their survival as they face the tasks of rebuilding, helping each other to carry on.

4 thoughts on “There Will Be A Tomorrow”