It’s That Time Of Year

IT’S GETTING COLD OUT THERE. The leaves have fallen. That can only mean one thing: It’s Catalogue Season!

This time of year the Mail carriers get a real workout. Their backs have to be up to the task of carrying several pounds of catalogues to every house on their routes. The eyes of Chiropractors all over the country are lighting up in gleeful anticipation. I fear the day that Amazon decides to publish a catalogue.

For the last few weeks our mailbox has been filled to overflowing with slick paper catalogues from places all over them map. They send ‘em out and I dump ‘em into the recycling bin. I suspect that the only profit goes to the printers and to the models who pose wearing the ugliest fashions ever made. I don’t fall into any of those categories. I’m just a Consumer. 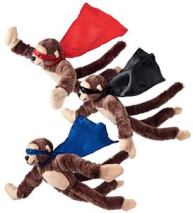 We got a brand new catalogue the other day. Jammed into the mailbox along with a couple of bills and a few groveling pleas from various organizations was a catalogue from “Plow & Hearth,” whatever that is.

I thumbed through it and I have concluded that they are peddling stuff aimed at the upscale Ma and Pa Kettles of America. Each page was filled with picturesque bits of Pseudo-Americana made by slave labor in North Korea or someplace in Central Asia.

I was mystified. Is there really a need for cast iron tea kettles that look like a pile of pine cones? I wonder who feels the need to buy “Flingshot Flying Monkeys?” I guess that nothing says, “Down Home” like sitting by the hearth with some Flying Monkeys.

My wife, the lovely and commercially astute, Dawn, and I passed the “Plow & Hearth catalogue back and forth amidst sporadic laughter. Mid-Browse Dawn asked the perfect question – “Why did we get this catalogue? We aren’t rustic in any way.” It took a while, but I think we finally cut through the layers of irrelevance to discover the shaky reasoning involved to answer her question.

“Plow & Hearth” – the name implies Agriculture, along with Warm and Cuddly times by the fireplace – a sort of Cracker Barrel existence. No one lives at the Cracker Barrel, but there are people who own real plows and have actual hearths. Some of those people are Farmers, but most are Hollywood types who buy “Homesteads” and ranches in Idaho (earning the eternal hatred of real Idahoans.).

In a way that only the IRS can understand – Dawn is a Farmer. She still owns a sliver of the original family farmland down in Texas. We’re not talking “Giant” or “Dallas” here. It is just enough to still qualify as a “Farm,” producing enough cotton to make a single package of Q-tips. My guess is that the fine folks at “Plow & Hearth”, comfortably huddled by their own fake hearth in their North Korea hovel, bought a mailing list of every “Farmer” in the United States and hit the “ON” button on their printing press. Ergo, Ipso Facto, and Corpus Delecti – the Plow & Hearth Catalogue ends up in our mailbox.

I’m sure that the folks behind the Plow & Hearth are nice people who pet their dogs and eat sufficient fiber, but their catalogue is full over overpriced tchotchkes. There will be Plow & Hearth packages under some Christmas trees in December and on the table at the Yard Sale in May in the eternal circle of Commercial Life.

Well, Hakuna Matata to one and all.