Brace yourself, America! It’s that time of year again when, 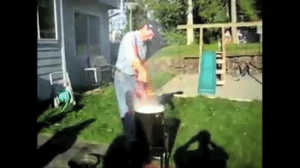 all across the country, people will be preparing Thanksgiving Turkey Dinners by the millions.

For most it will be a joyous chore to feed family and friends, but for many it will be a challenge comparable to trying to fly to the moon in a lawn chair powered by some helium balloons from the dollar store.

Despair not, help is available!

This year, as it has for the past 34 years, the fine folks at Butterball will be running their Turkey Hotline to answer questions and help salvage those Thanksgiving dinners for the less than expert chefs. Not everybody can be Julia Child – nor would you want to be – she’s dead.

Over the past 34 years the folks answering the calls at Butterball from mystified cooks have had to both give clarifying information and not scream or laugh out loud at the same time.

“I carved my turkey with a chainsaw. Is the chain grease going to adversely affect my turkey?” The answer is YES, don’t serve it or it might kill someone. I can’t think of a worse way to top off Thanksgiving dinner than having the diners keeling over at the table.

“How do I roast my turkey so it gets golden brown tan lines in the shape of a bikini?” The recommendation was “strategically placed foil.” I really don’t want to know why they wanted this information. That is between them and their therapist or defense lawyer.

And then there was the man looking for a quick way to cook his turkey who put it in the oven in the self-cleaning mode. While that certainly would be quicker than recommended by Butterball, so would napalm or a thermonuclear explosion.

Finally, there was the woman who called the Hotline for advice on how to get her Chihuahua out of the turkey. Let’s not go any further with that one.

Most of the calls to the Hotline are, Thank God, rather mundane, such as:

“How long does it take to thaw out?”

Thankfully, there are very few questions that are matters of life and death. But as one generation of cooks learns the ropes, along comes a new crop of would-be Emerils to pull the pin on a turkey grenade.

In the last decade or so the concept of deep frying the Thanksgiving turkey has caught on. Unfortunately, it seems to be most popular with men who think that, since they can change the oil in the pick-up truck, they can deep fry a turkey. It’s just a different kind of oil. Right?

Deep frying a turkey brings its own set of caveats, warnings and instructions, none of which bear any resemblance to servicing the Ford F-150.

The Butterball people list them on their website and instruction #1 hints at what must be a recurring problem among deep frying novices:

#1 – Before deep frying – take the wrapper off of the turkey!

Really? You mean I shouldn’t leave the little net bag and plastic wrapper and labels on the bird? Why not leave it in the plastic bag from the supermarket as well?

When you try deep frying your first turkey it is firmly suggested that you wait until the bird is completely thawed – unless you actually want a geyser of hot, and possibly flaming oil, launched over you, the kitchen and, eventually, the smoking ruins of your house. If this happens you might ask the firemen who will be putting out your house fire if they know the way to the nearest Denny’s or IHOP. Both places will be serving Thanksgiving dinner all day long. 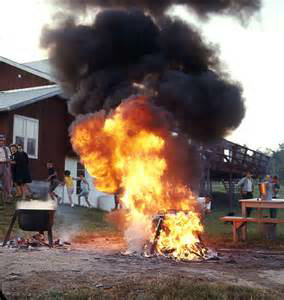