A Hundred Years Ago

WHILE THE CALENDAR SAYS THAT IT IS NOVEMBER 12 we in this country are thinking of today to honor and remember November 11th.

November 11, 1918 at 11 AM – that was when the fighting stopped by the terms of the “Armistice” marking the end of World War One.

As a child, I recall, that it was still called Armistice Day. It was in 1954 that it was changed to “Veterans Day” in honor of all the soldiers who served in all of this nation’s wars.

World War One, from 1914 to 1918 was optimistically called “The War to end all wars.” That was a failure almost immediately and continues to be.

The American veterans of World War One are all gone now. I knew a few of them while I was growing up in the 1950s. They were still active, vital, men who, like veterans of other wars in my lifetime, did not like to talk about their experiences during their war. Even though each soldier was part of a collection of millions of others, for them it was an extremely personal and individual experience. No one in my family fought in the First World war. My father was a child and his father was never called. If the U.S. involvement in the war had been longer or the war had dragged on into the 1920s he might have been drafted into service. My other grandfather was an immigrant with nine children – not a likely candidate for the military even though he had been in, and deserted, from, the Czar’s Russian cavalry.

This poem that is part of today’s posting is perhaps the most iconic work to come out of “The War to end all Wars.” 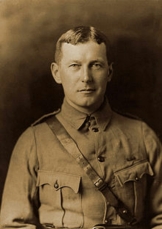 “In Flanders Field” by John McCrae was written during the war in 1915 while McCrae was a Lieutenant-Colonel in the Canadian Army as a Surgeon during the Second Battle of Ypres in Belgium. He died of pneumonia near the end of the war.

The everpresent red poppy, still used as an icon of veterans of all wars, thrived everywhere on the blood soaked earth of the battlefields of that war. This year, 2018, marls 100 years since the end of World War One and the poppy fields still blossom.

Take some time today, no matter what country you are in, and think about the sacrifice, the honor, and the terrible waste that war and all of the other wars have laid upon the human race. Look at the poppies growing on battlefields around the world and say a prayer for those who have nourished the earth with their blood in the effort to bring about a time when there will be no more wars. 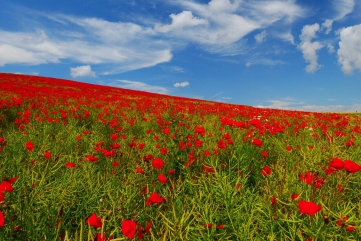 3 thoughts on “A Hundred Years Ago”