Reblog From The Koolkosherkitchen “Immersion Pie”

Today’s blog is originally from the Koolkosherkitchen: A blog that is about both Food and Life. I am sure that you will enjoy it – even if you don’t take the recipe into your kitchen.

This story was shared by Rabbi Y.Y. Jacobson, a fantastic public speaker with a great sense of humor. A renowned psychologist was giving a lecture on his theory of the flood. According to him, a myth about the flood of catastrophic magnitude has been present in every culture and religion in the world. He postulated that it was primitive people’s way of expressing their insecurities and fears for the future. He unequivocally stated that there has never been an actual flood. One of his listeners asked permission to comment.

“And what if there really was a flood? What if it isn’t a myth?” he asked.

A stunned silence enshrined the audience of professional, highly educated men. After a prolonged pause, the lecturer replied, “My teacher Zigmund Freud would ask who is stronger, elephants or polar bears. He would then answer that it is impossible to judge as they never meet; they exist in different climates. You and I, sir, are an elephant and a polar bear; we exist in different climates: you allow that the flood might have happened, and I don’t. We will never meet.” 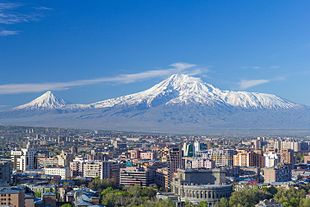 There are several different locations where Noah, a righteous man in his time, supposedly parked the Ark when flood waters receded. Amateur archaeologist Ron Wyatt, among others, claimed that he found the remains of the Ark and some artifacts to prove the veracity of his findings. His discovery has been highly disputed, but the location is spot on: Mount Ararat, as it is identified in ParshasNoah (the view is from Armenian capital Yerevan). The following video is shot by a drone flying over Wyatt’s discovery.

Take it with a grain of salt, if you will, but today hardly anybody disputes the flood itself. “Now the earth was corrupt in G-d’s sight and was full of violence” (Genesis 6:11), He got outraged, and set out to obliterate everything. It was a total immersion: “The waters rose and increased greatly on the earth… and all the high mountains under the entire heavens were covered” (Genesis 7:18 and 7:19). We can’t help but reflect upon the Biblical flood as thousands of people in (sic) Huston are trying to cope with a disaster of the same nature, torrential rain that flooded the city, leaving its inhabitants, human and animal alike, homeless and in need of help.

Among many photographs of immersed buildings and drowned cars, there are quite a few of “modern Noahs,” righteous among the people of our times, boating four-legged friends to safety. As the waters are receding now in Huston, and relief is pouring in, this Immersion Pie might serve as a reminder to love and care for each other and all His creatures.

The idea is to imitate earth boiling under torrential water, so there is no crust. You mix spelt or gluten free flour with soy or almond milk,  add some brown sugar and cinnamon, a little baking powder, and a pinch of salt.

You can immerse any berries or diced fruit, but blueberries are still in season, huge and juicy, so first I immersed them into a mix of vanilla extract and brown sugar. They should sit and contemplate their fate, while you are mixing the rest of the stuff. After all, Noah spent 120 years building the Ark, to give people a chance to abandon their corrupt ways and make corrections, so give your blueberries a chance for 10 – 15 minutes.

Since my first rule of dessert clearly states that it’s not a dessert if it doesn’t have chocolate, I also mix in unsweetened cocoa powder. It looks like mud already!

The process of immersion is about to start! Melt Smart Balance or any butter substitute of your choice and pour it into a pie baking form. Pour your mud – batter, that is! – into it and spread it evenly. Empty your blueberries, juice and all, on top of batter and also spread them evenly.

Let it bake at 350 F for an hour or so, and the immersion will occur naturally while you are not even looking – the batter will rise and cover most of the berries. There is another, much more positive meaning of the term total immersion. It is one of the most effective methods of language acquisition: drop a person into target language environment where nobody speaks his native language or any other language he knows, and, according to S. Krashen’s Natural Language Acquisition theory, he’ll start communicating in target language. It’s a sink-or-swim method, and Krashen is right: in about three months, give or take, they start swimming, i,e, talking. By the same token, I choose to believe that dropping a person into a loving environment full of kindness will force him to acquire the same behaviors. From there – Existence Precedes Essence! – is only one step from behaviors to attitudes, and from attitudes to values!

So sprinkle some more cocoa powder on top – the more chocolate, the better! – add some crushed walnuts, if you like, and cut yourself a nice juicy piece of the Immersion Pie – total immersion in love and kindness!

One thought on “Reblog From The Koolkosherkitchen “Immersion Pie””