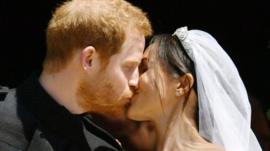 DID YOU STAY UP ALL NIGHT TO WATCH THE ROYAL WEDDING? I didn’t, but it was close. My wife, the lovely and seriously Royal Wedding-a-phile, Dawn, planned it all out. Up at 4 AM, a pot of tea, and comfortable chair. That and the TV and she was set. I was set too. At about 11 PM I was in my Lou Ferrigno Onesies and checking out for the duration. I was asleep before the first Fascinator showed up.

It’s not that I don’t care about the lovely couple and the wedding.

No, that’s not true. I really don’t care. We weren’t invited. They didn’t even announce where they were registered (It was Target). I wanted to send them some dish towels, but if they didn’t care, then I didn’t care. I didn’t have anything to wear anyway. I mean, really, what Hawaiian Shirt does one wear to an event like this one?

When I did arise on Saturday morning the replay was on every channel except C-SPAN so I have seen the highlights. I figure that I am now as fully informed as anyone, plus I got a good night’s sleep. I’ve picked up some inside knowledge along the way. It pays to keep an ear to the ground.

Someone asked me how Harry and Meghan met. I think they were hoping for something romantic, but my sources tell me that they really met over the “Five Dollar Video Bin” at Wal-Mart as they were both grabbing for the last copy of “Nacho Libre.” That’s sort of romantic, in its own way, I suppose. That was what I’ve heard from my usual highly more or less reliable sources, so I pass it on. They don’t talk about that a lot I bet.

I’ve been watching CNN report on the wedding and their speculation about the receptions (plural) that are going to take place. They even had a picture of the Official Royal Wedding Cake. It is supposed to feed several hundred people. I bet that 98% of the cake will end wrapped up in paper napkins or in baggies and kept as souvenirs. They could have saved a bunch by just having a Styrofoam covered in frosting “cake.”

I’d love to be a fly on the wall at the main wedding reception. Will the Groom’s Best Man, Prince William, tell a few bad jokes and embarrass himself and everyone else? Will “The Royals” do The Chicken Dance? Will Harry scrap all vestiges of good taste and manners and smash a piece of wedding cake on Duchess of Sussex Meghan’s Royal Face? That would be on the front page everywhere within an hour.

I’ll get over not being invited. Maybe it got lost in the mail. No matter. Life goes on. I will survive. They will survive with a staff, but one day soon they are going to wonder why they don’t have enough dish towels.