SOMEONE KINDLY INFORMED ME this morning that this month has been designated “National Dog Bite Prevention Month.”

Who knew? Nobody told me about it until today. More importantly, I’d like to know if anybody bothered to inform the dogs of the world about this.

I have never been bitten by a dog – other than the playful nips of puppies. To be truthful, I’ve suffered more bites from humans than I ever have from animals. I have been scratched by dogs, but that happened while the dogs were showing me how glad they were to see me. “ 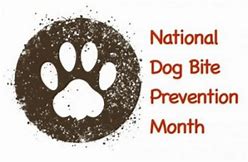 Those dogs weren’t angry, just the opposite. All they really needed was some basic obedience training and maybe a “Pawdicure.” I know a lot of people for whom that might be a good idea as well.

I’ll bet that this “Dog Bite Prevention Month” thing is the brainchild of Post Office Letter Carriers and Fed Ex Drivers. A part of their daily work routine calls for invading the territorial space of Dogs everywhere. Dogs will jealously guard their turf and any intruder is really taking their chances. I’m the same way. Anybody crashes into my space, either physical or intellectual, and I am quite likely to bite, My bites are verbal except in the most extreme cases – then I go Conan on them and that can be frightening. I know that it is for me.

I cannot think of a job I would like less than being a guy who delivers stuff. There is just too much walking, heavy lifting, and usually a bad uniform. And then there is the problem of having to deal with all of the Biting Opportunities the job presents – most of which are from dogs, but I’ve heard the most horrible stories.

Dogs are not the only Hyper-Territorial creatures out there. I’ve had one Postal Person tell me about her run-in with a customer’s pet monkey. Nasty little critters.

Any time you have to go onto someone else’s property you are risking it all. Just ask the person who goes around, walking into people’s yards, to read those Gas and Electric meters. Those folks should be issued Kevlar shorts as part of their uniform. Not only do customer’s pets go haywire when they spot a stranger in their yard, but all too often the human customers go nuts as well.

I worked for the Power Company in California for several years and I heard the stories. The Meter Readers had to deal with dogs, cats, goats, pigs, customers with guns and baseball bats, and in one case – a bullwhip. There is no reasoning with a bullwhip – or an angry pig for that matter.

So, let’s all celebrate National Dog Bite Prevention Month. Let’s all go out, find a dog, and bite it – just to get the message across.