A Season Of Hope

ONE OF MY GREAT JOYS IN LIFE, aside from my wonderful wife, Dawn, Family, and Coffee, is Baseball. We are now into the 2018 Season and, of course, I am rooting for my team – The San Francisco Giants.

Last year the Giants sucked like an overworked Hoover vacuum. This year we are hoping that they will do better. In 2017 my boys lost 98 games. The season is 162 games and you aren’t going to get into the postseason playoffs winning only 64 games – not unless you buy a ticket like everybody else. 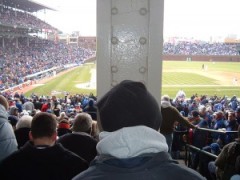 Since the end of last season the Giants have acquired some new blood that should help. New young players have also made the team and we are hoping for a significantly better season – but time will tell.

There are people, here in the heart of Chicago Cubs and St. Louis Cardinals territory, who question why I am wearing a Giants cap year ‘round. I am obligated to tell them that I had lived in San Francisco for 25 years and, just because you move, you don’t give up your team.

I try to get that concept into their thick skulls by asking them a simple question.

“You, a lifelong Cubs fan (Cardinals, Reds, White Sox, whatever) – if you retire and move to Florida would you burn your cubs cap and become a Tampa Rays fan?” Of course they respond with, Duh, well…No.”

I hope my message gets through and it generally does, except when I am talking with a Dodgers fan. For them there is no hope. They are already lost souls.

I have always been a fan of the game of Baseball. It is a game of elegance and an almost balletic beauty. Watching a perfectly executed 6 to 4 to 3 Double Play can bring to my lips the urge to yell, “Bravissimo!” as the players glide and leap with the grace of a Nijinsky or Baryshnikov.

(Footnote for the uninitiated: “6 to 4 to 3” = each player on the field has a designation for scoring purposes. 6 is the Shortstop, 4 is for the Second Base player, and 3 is First Base. This will be on the test at the end of the season.)

Baseball, like Ballet, is a young person’s game. Most player’s careers end in their 30s although a few can be effective after 40 years of age. Not every dancer can be a Nureyev. Baseball is a short career for most as it takes a toll on the body, pushing it to extremes of performance and asking it to extend itself beyond the limits of what can normally be expected. Both dancers and Baseball players learn to play with pain.

They can play with pain, but broken bones are another thing altogether. This year, during his final Spring Training game, just a few days before Opening Day, the Giants Star pitcher took a line drive batted ball to his pitching hand breaking a finger. He may be out of action until July.

Such is the nature of The Game. It has the muscular elegance of Ballet and the fragility of the thinnest eggshell. Careers light up the sky like a Supernova and then can die out as quickly as a shooting star. Whether the performer is on the Stage or on a grassy field their dreams and endless efforts to improve can end in a moment.

3 thoughts on “A Season Of Hope”