THIS MORNING’S NEWS FROM OUR CORRESPONDANT IN ASIA carries two related items.

It seems that the air pollution in Bangkok has reached such dangerous levels that the citizens are being advised to breathe only when necessary. The report says nothing about tourists. I guess any visitors to Thailand are on their own breath-wise.

The second alert, also from Bangkok, is that Thailand’s roads are the most dangerous in the world. Given the opaque quality of the air I am not surprised that driving can be a thrill a minute.

Put these two tidbits of information together and if you are in Thailand you are in the middle of a real mess. The only place I can think of that is even more screwed up is Washington D.C. when Congress is in session. Talk about pollution. 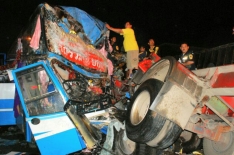 Relax. I’m not going to get into a rant about politics. I don’t do politics here.

I make the comparison between the chaotic conditions in Thailand and our own governmental chaos because in both places you can’t get a clear picture of what is going on around you, it’s hard to swallow, and everything seems to result in a pile-up. And of course, it is always the other guy’s fault. The only difference is that there are more Thai restaurants in Bangkok so everyone can get a good dinner.

For decades Thailand used to advertise itself as “The Land of Smiles,” but given the current state of affairs there it is no longer filled with smiles but grimaces. In our country it looks like our smiles have morphed into either growls or smirks – neither of which are very appealing.

Our governmental bodies, at all levels, are wracked by “Public Servants” who are quite busy stealing the silverware. Everyday there seems to be another story in the News of some County Clerk or State Official who has been cooking the books for the last twenty years or having illicit affairs with their subordinates or local farm animals.

In Thailand there is a military dictatorship in power that promises the people that free elections are just around the corner, but that corner keeps getting farther and farther away. Here at home we seem to be going in the other direction. We are in a constant state of electioneering. Everybody is in a perpetual campaign mode. I’m not sure which situation is more depressing. Either way nothing much seems to get done. Nothing changes. In

one place nobody gets elected while in the other the same people keep getting re-elected no matter how egregious their behavior. Nobody is happy with their representatives yet 97% of them are returned to office.

While in Bangkok it is advisable to breathe only when needed, in the US the stench is just as bad and toxic. Our highways may be better than in Thailand but no matter where you go the governments of, by and for The People are like a pile of wrecked cars at the bottom of an icy hill.

Power is the key that unlocks the cashbox and those who have the power don’t and won’t give it up without a fight. Like a speeding car rushing through a smog filled city I fear we are on our way to a head-on collision with tomorrow.

Take a deep breath. It may be a while before the air is clear again.

One thought on “The Same Old News”