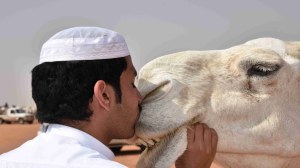 IF THERE IS ONE THING YOU CAN SAY ABOUT ME it is that I’m pretty open minded when it comes to how people want to live their lives. As long as you don’t scare the horses or foul the footpath I’m not going to complain. I’m not saying that I might not shake my head or chuckle a bit, but that’s what I do six days a week.

Which brings me to today’s excursion down “You gotta be kiddin’ me Boulevard.”

I was struggling with my socks this morning – trying to get them on without bending over per doctor’s orders (the eye thing) when the early morning news grabbed my attention. It must have looked like it was going to be a very slow news day there at the TV station.

Dateline: Saudi Arabia – the place on earth that has more money and less water than any spot this side of West Hollywood. The story? The Annual Camel Beauty Pageant.

Whatever floats your boat.

It seems that every year the Saudis hold a contest to pick the most beautiful looking camel in the country. Personally, I think that trying to find a beautiful camel, even a nice looking camel, would be possible only late on a Saturday night and with an enormous amount of alcohol. Since alcohol is officially a serious no-no in Saudi Arabia I knew that I would never be asked to serve as a celebrity judge. 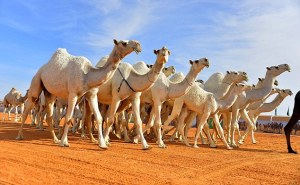 The fact that the contest exists at all is enough to warrant some news coverage, but there was a kicker that made me drop my socks.

All of Saudi Arabia was rocked to the bottom of the sand dune when 15 entrants were disqualified and made to leave the Pageant. It seems that the owners of the 15 camels had been attempting to enhance the “beauty” of their camels by injecting them in strategic locations with Botox.

Unfortunately, the TV broadcaster/talking head did not explain where these “strategic locations’ might be – other than in Saudi Arabia. If I was asked to beautify a camel I don’t think I would have even thought of using Botox. A Ball Peen Hammer maybe, but not Botox.

In this country Botox is used by folks who wish to enhance their skinny lips or sagging whatevers in an effort to look more youthful, succulent, and yes, beautiful. What the impact of Botox is on a camel lies beyond the limits of my comprehension.

I do congratulate the Saudi Pageant Officials on their adherence to the scrupulous rules governing the contest. You have to have rules and they have to be enforced otherwise you might have Llamas and Alpacas trying to sneak into the competition.

Shame on those cheaters who tried to gain an unfair advantage by using what could only be called “Performance Enhancing Drugs.”

The only thing worse than this would be if some photographs surfaced showing the camels in…compromising positions. I don’t think I could handle that.

4 thoughts on “Rules Are Rules”