“After you showed me these pictures in your office. Again, I’m sorry.”

“Yeah, yeah – go on.” The sirens were getting louder. “I think your neighbors are nosier than you thought.”

“Well, after I left your office, I went down to the bar down the block. A guy accidentally bumped into me and I hit him, hard. The barkeep called the cops and I spent the next 72 hours in lockup.”

“But what about him,” I said, pointing to the naked guy in the picture? “Talk faster.”

“Him? He was one of the cops who pulled me off of the guy in the bar. He knew who I was and the next day, with me in restraints, he told me that he’d killed her a few hours after they’d hauled me in. He said that he went to see her, told her about the pictures and me being arrested. They argued, she pulled a knife on him, and it went to hell from there.

“He said that it was fun, what he did to her. Then he beat me up while I was tied to a chair.”

“I was released when this filthy animal did my bail. He wanted me out. If I was out when she was discovered they’d come looking for me first thing. You know that. It’s always the jealous husband. He needed me out on the streets. I was his alibi.”

The sirens had stopped and I could hear them coming up the stairs like a herd of elephants. I looked at Cumberland. He was rocking back and forth on his toes, not knowing what to do next.

Four cops came through the open door, guns drawn. I recognized one of them, even though he had his clothes on. He was smiling.

“Nobody move. You – drop the pistol if you want to live.”

“How did you know he was here,” I asked?

“We didn’t, but we knew you were. Cumberland, you are under arrest for the murder of your wife.”

“I didn’t do it.” He was getting really agitated. I hoped he wouldn’t snap.

While the smiling cop started to read Cumberland his rights, one of the other cops took out his cuffs and moved toward the much smaller man, still in his apron.

“Stay away from me. That one,” he said, pointing at the now outright grinning cop by the door. “He’s the one who killed her, not me.” He moved around to the other side of the table. “No, stay away from me.” Cumberland looked at me for help. I was no good.

It was like watching at a cat play with a cornered, terrified, mouse. Looking at the two of them I finally believed Cumberland’s story.

“Stay away from me,” he said. Crazy and desperate, Cumberland grabbed the still hot dish of lasagna and threw it at the cop.

When the steaming mess hit the cop square in the face, he screamed in pain, and the no longer smiling cop, who I now finally believed was the killer, opened fire, hitting Cumberland square in the chest.

I hate jobs like this. Snooping into bedroom windows; taking grainy photographs that are going to make somebody cry and somebody else walk out the door. Only this time two somebodies got carried out. 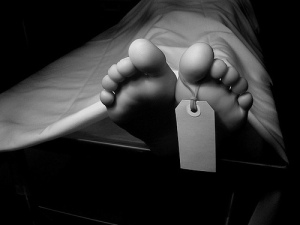