He started moving toward me. I lifted my revolver and aimed it between his eyes.

“Stop right there, Cumberland. Don’t get any closer or I will shoot you dead.”

He stopped. “Can I just set this down? It’s getting heavy and it is hot. These are cheap oven mitts. I’ll put it down on the table and I’ll back up. OK?”

It seemed like a reasonable thing to ask. “OK, but no funny business. I’m a good shot.” That was a lie too. I’d be lucky to hit him at all even though he was only five feet away. I hoped that my shaking knees weren’t obvious.

He did like he said. He put the lasagna down on a straw trivet, then went back to where he started. He closed the oven door and threw his mitts on the range top. I didn’t like his additions to our agreement. I told him so. He shrugged and I pressed him some more.

“Tell me, Cumberland. Why did you come back here? I’d think you’d want to get as far away as possible.”

“Where would I go? And if I started running I’d never be able to stop. I came back here because I needed a safe place to stay. The Police were done with it and most of the neighbors aren’t real nosy. After you chased me away from the Mission – I came home.

“What kind of alibi?”

“I was already in jail.”

“What are you talking about – in jail? What kind of line are you trying to hand me?”

“I’m trying to hand you the killer – if you’re interested. Are you interested – or are you just going to shoot me and close the case?

My knees stopped shaking and my heart started pounding.

“I’m not going to shoot unless you force me to.” I hoped not, anyway.

“Assuming, for a second, that I believe you – you know who killed your wife?”

“I didn’t at first, when you showed me those pictures, but I do now. The pictures – they’re in my desk there. Can I get them?”

“Top right drawer. You don’t trust me? You think I have a gun in there”

I just stared at him. I was beginning to have doubts. What was done to that woman and the man standing in front of me didn’t match up so well anymore.

I opened the desk drawer. There was the Manila folder I’d given him, but no gun. He didn’t move until I tossed the folder onto the table.

To be Continued – Next week, the Conclusion 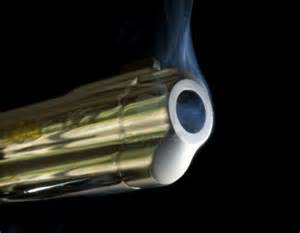