Come Out, Come Out, Wherever You Are

I HAVE BEEN INVOLVED IN A LONG and arduous search lately. I’ve been looking for a new Doctor, your basic G.P. to keep me ticking – you know – a Witch Doctor.

The Doctor I had been seeing ever since I came to Terre Haute (That’s French for “Turn your head and cough.”) has decided to retire. I take no credit or blame in his decision making process. He retired and it turned into a case of finding a replacement before my prescriptions expired.

Let me tell you – it is not as easy a task as one would expect. There aren’t that many doctors in town, who have actual degrees in Medicine, who are anxious to take on 71 year old Geezers on Medicare. It seems we have a nasty habit of dying and I hear that means they have a whole new set of paperwork to fill out. 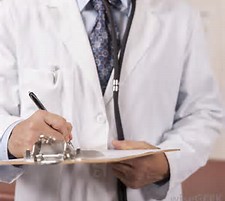 So, I have been casting about looking for someone who knows which end of a stethoscope goes where and uses latex gloves before getting too personal.

I called the number of a clinic here in town and explained my situation to the very pleasant young lady who answered the phone. I had no idea who she really was, but she listened. I answered a number of questions for her and she told me that she would “Submit” my request to their Doctors.

I was auditioning for a Doctor. If I had known that going in I would have prepared a couple of monologues and maybe an up tempo song. I know how to do that, but trying to get cast by a Doctor as “Patient #1” – that’s new to me.

The polite woman on the phone said that they would get back to me. In other words: “Don’t call us, we’ll call you.” I’ve heard that before, but I was still hoping for a call-back. I should have told them that I could cough in six different languages. Maybe I should have sent them an 8 X 10 Glossy of my colon.

After about a week of not hearing back I had assumed that they had picked someone else, a blonde probably. But then! That woman called me back. I got the part – er, I mean, the Doctor would see me!

My appointment was on short notice – the next morning at 9:30 AM.

I put all of my meds in a Kroger plastic bag. I had already given them the drug info over the phone, but they still wanted to see for themselves. I think they assumed I was illiterate. I took everything. I wanted to show them that I would be a “Good Patient.”

I arrived a few minutes early and with all of my paperwork filled out I was greeted by “The Nurse” who weighed me (!!), took my Blood Pressure (!) and, after a few more questions and a look through my plastic bag, gave me a Flu shot. After that she left me with the words, “The Doctor will be right with you.” In my experience that means, “The Doctor is somewhere in the building and he’ll be with you sometime between now and the next arrival of Halley’s Comet,” I checked my watch and tried to relax.

questions the nurse had just asked me. They all do that.

In the course of this first meeting the one thing he was adamant about was that I need to get one of those DIY home Blood Pressure Monitor gizmos. I checked into that and Amazon (who else?) had a fine selection and I can have it on my arm in two days.

I’ve always felt that Blood Pressure is a good thing, but like liquor and redheads, too much of a good thing can be unhealthy.

My overall opinion of the “New Doctor” is that he seems to be a real Doctor and he does not impress me as the kind of Doctor who is suddenly going to start doing Donald Trump impressions while holding my junk. I take that to be a good sign for our future relationship.

7 thoughts on “Come Out, Come Out, Wherever You Are”