I MISS THE DAYS when any road trip involved stopping along the way to enjoy all of the wonderful Roadside Attractions. When I was a kid my Dad would pull off the road so we could “ooh” and “ahh” at the Rattlesnake Farm and the World’s Largest Ball of Twine or to stop for a snack at the café that boasted 72 flavors of ice cream.

These days there aren’t as many of those reasons to stop along the way. To find such interesting sights you have to tune into the vibes along the highway and keep your eyes peeled. That is what we’ve been doing while on the road. 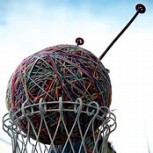 With the Fourth of July we saw about 63,000 places we could buy discount fireworks. “Buy one – get three FREE!” I suspect that all of those fly-by-night fireworks merchants will turn out to be a substantial portion of the Gross National Product. They do serve a purpose I guess, but they scare me sometimes.

was a big red, white, and blue striped tent filled with fireworks in the parking lot. “Buy one – get 2,539 Free!” What bothered me was that, from the front door of the café, to the tent was no

more than 20 feet. I could sit there and watch the customers in the tent examining their fireworks while smoking. One stray puff and we would all have been turned into charcoal.

There are other, less dangerous, sites along the side of the road as well. We were in eastern Tennessee, just across the state line from Georgia, when we saw a sign urging us to stop and visit a local farm where we could purchase our very own Fainting Goat. You read that right – Fainting Goats.

Fainting Goats are a small breed of goats. Cute little things that have a genetic quirk that causes

them, when startled, to drop like a rock for about ten seconds. They say that it isn’t painful and doesn’t hurt the goats, but how would you like it if people kept sneaking up behind you and yelling “BOO?” It’s a good thing the goats are small or there would be some people running for their lives – once the goats got their footing again.

Along our way home we saw Fireworks and Fainting Goats, but the best attraction – anytime and anywhere – is always the people you meet.

I’m not as young as I used to be so I need to stop more often to hit the Boys Room and get something refreshing. Thankfully, there are countless gas station mini-marts all across this

country. We pulled into one and, after seeing a man about a horse, I got myself a little something to sip on for the next two hundred miles. Ice cubes, Soda, Straw and a Plastic Lid.

When I took my 237 ounce cup of Diet Whatever up to the cashier I noticed that there was a woman, a local I assumed, who was just hanging out, chatting with the cashier – two old friends. I set down my drink and reached for my wallet when the lady friend pointed at my plastic drink cup and spoke up with a seriously deep southern drawl.

“Honey, I don’t think your lid is on too tight.”

What do you say to that? Probably not what I said.

“Well, Darlin’, people have been telling me that for years.”

It was a long drive home.