I WAS DRIVING AROUND TOWN YESTERDAY, taking care of errands and chores – the usual stuff. As I drove past the neighborhood Taco Bell I noticed something on their marquee. It read

“Employee of the Month – Heather.”

Nothing really unusual about that except that Heather has been the Employee of the Month for two months in a row there. She must be something special. Perhaps she can make tacos faster than anyone else. I don’t know, and to be honest – I don’t really care. Anyway I offer my Congratulations to Heather. I just hope that her obviously superior skills don’t have a negative impact on the other employees. People can be so petty sometimes.

I’m sure the Manager there will keep an eye on things to keep employee morale high. By broadcasting to the world (or at least to this section of Wabash Avenue) that Heather is a top notch worker it tells me that employee recognition is high on the Manager’s agenda.

Of course, not all employee recognition is a good thing.

“Congratulations to Paul, this month’s winner of the Disgruntled Employee Postal Rampage.”

But here at our local Taco Bell I’m sure that Heather has earned her recognition. Not everyone can stand out enough to be EOTM two months in a row. I know I couldn’t do it.

Dealing with the Public, especially a hungry public in a hurry, would not bring out the best in 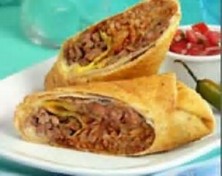 me. I’d give myself about twenty minutes before I’d be vaulting over the counter and cramming a Chimichanga down someone’s throat.

“Here, eat this, you indecisive as a squirrel, idiot. This is ‘Fast Food.’ It shouldn’t take you all day to decide what you want. I’m not Heather!”

I’m not Taco Bell material either.

Toy to a local Comedy Club. (The second I heard that I knew that things were going to turn sour. Comedy Clubs are nothing to laugh at.) While there, the very attractive young lady – sort of a combination of Joan Jett and Dan Rather – had a few shots of something and, well, she and her BT had to be escorted out. Trust me – you’ve got to work at it to get 86’d out of a Comedy Club. And one in Philadelphia? She must have cussed the ghosts of Bob Hope and Lenny Bruce.

The Employee Recognition part of this came once she was out on the sidewalk. She was obviously drunk and let loose on the Police Officer who had removed her from the club. The sad part is that every second of it was on video. I’m sure she didn’t learn those curses at the Nanny McPhee School for Girls. She berated that cop for close to five minutes with a monologue that would make the Sixth Fleet blush.

Later, after posting bail, she went home in time to hear her phone ringing. It was the Station Manager at her TV Station calling to tell her that she was fired. The video of her sidewalk performance was already up on the Internet and getting more hits than all of the online cute kitten pictures combined.

She is now the “Ex-Employee of the Month” in Philadelphia. I think a career change might be in order, but no matter where she ends up – she will never be a Heather.

3 thoughts on “Congratulations To Heather”