EVERY ONCE IN AWHILE I AM ASKED TO GIVE SHORT SPEECHES or presentations to civic groups or service organizations. I’ve done a few things for the likes of Kiwanis and businesses. Lately I have been asked to speak before an organization that serves citizens with special needs.

A couple of months ago I went downtown and spoke before both clients and staff of this same outfit about the value of writing down their own personal stories.

I said to them that, “No matter who you are you are a special and unique individual and you have a story worth telling.” I spoke to them about how to write down their stories and how, in doing so, they would be able to both learn and to teach. They would learn more about themselves and they would teach everyone else about their uniqueness, challenges, and gifts that they have to offer to the world.

That day I expected to talk for about 20 minutes and then hit the road. Their comments and questions kept me there for more than an hour. They invited me back.

When we settled on a date and time I asked them what they wanted me to talk about and they gave me carte blanch. I didn’t decide on a topic until the night before my scheduled appearance.

Back in the 1980s and early 1990s I was working for the Pacific Gas and Electric Company in San Francisco. A lot of my time was taken up with being the president of an Employee Association for People With Disabilities, and taking part in a number of Diversity Awareness training sessions, presenting a module on Disabilities. I honestly think I got more out of it than the people sitting in the chairs in front of me. I ended up modifying my presentation into something more devoted to pointing out our similarities than our differences. I found it rewarding to have everyone think about defining or redefining the meaning of the word “”Normal.”

And that is what I spoke about on my return engagement here in Terre Haute (That’s French for, “Think about it.”).

Like my first time there I was speaking to a mixture of both clients and staff. This time I also had a couple of Corporate Suits there who were visiting the office that day. They were pleased to have an “outsider” come in to speak. They took pictures and actually stayed to listen.

They offered me a very formal looking podium, but I declined, telling them that I preferred to be in among the audience – up close and personal. That comes from my years doing comedy and teaching traffic violator schools – that and also knowing that “a moving target is harder to hit.”

For twenty minutes I talked with, not at, everyone there about how no matter what abilities you have or not, that is normal – your normal.

There are seven billion people on Earth and they are all normal. Different?  Yes, but everyone 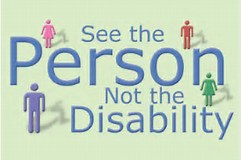 lives their life inside their own normal.

Hearing that from a man who is, himself, labeled as “Disabled,” just like most of the people in that room, hit a nerve. Men and women who were silent and motionless when I started began to express themselves and to reach out to exchange “high-fives” with me. The look on the faces of the Staff was a mixture of both surprise and joy. I was a hit.

They asked me, yet again, if I could return in a few months. How could I say, “No?” 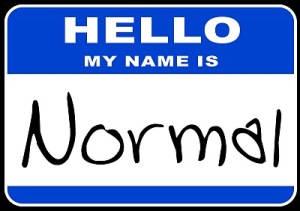