LAST YEAR WAS A TIME OF TRAVEL FOR US. Our seven weeks in Ireland was followed by about 10 days in Detroit, then a week in Texas. That was all squeezed into the period from early April to early July.

This year promises to be more sedate, but hardly comatose. We’ve already done one trip to Texas with another booked for Mid-July. In between there will be another 10 day sojourn, this time to Georgia near Atlanta. After that the calendar looks empty as far as travel is concerned – until the Holidays late in the year. 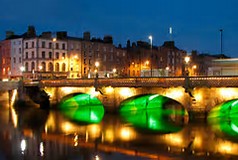 Dawn and I have talked about another trip to Ireland. We were there last year at this time, but any new trip may have to sit on the back burner for a while – unless, of course, that Lottery Quick-Pick ticket comes through.

We have been to Ireland five times since 2006 and it has become our place faraway where we feel right at home. There is an ease of living there. I don’t mean easy. Life can be difficult and pressing there just like anywhere else, but in Ireland there is an ease – a graceful approach to each day no matter what it brings.

Dublin can be like any other big city. With a population of almost two million people Dublin can be crowded, dirty, noisy, expensive, and dangerous. Considering that the entire Republic is home to about 4.6 million, if you leave Dublin you will find a lot of open space to move around and see the forty shades of green.

Part of that “Ease of Living” I talk about in Ireland comes from the Irish familiarity with the fragile quality of life. They appreciate their quality of life that is no longer mired in the shadow of starvation. In their National psyche their past is ever present.

In the 1840s there were eight million people on the island when recurring famine and starvation eviscerated the country. With a million dead and another million boarding ships for America and other countries, by 1926 Ireland was down to three million souls and didn’t start growing again until the 1970s. 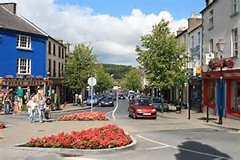 The worldwide High Tech Revolution helped Ireland’s economy to boom. Called the “Celtic Tiger” Ireland actually had people immigrating to the island looking for work and a better life. Many came from Eastern Europe as the old Soviet Empire crumbled. The population soared in and around Dublin.

The shift of people to the eastern shore of the island also affected the West of the country. Today, County Mayo, on the Atlantic coast, has a population only 1/3 of what it was before the famines of the 19th century.

It is the West and North where Dawn and I find ourselves most often – in Counties Mayo and Donegal. The small towns and villages have made us feel welcome. We aren’t loud and flashy people and I think the Irish are glad to see a couple of “Yanks” who through like a blustery

storm off the ocean. While in Ireland we have, too often, seen other Americans behaving so boorishly and loud that we felt compelled to apologize for their “Ugly American” antics.

Yes, we would like to go back again, to feel the warmth of the Irish people, enjoy the echo of their thousands of years of History, the Music that compels you to smile and tap your toes, and to feel the breezes off the ocean.

While Ireland and its people felt the economic blow of the recent global recession like everyone else, they have not lost faith or determination. Their course is steady and sure. Ireland is a nation with an eye on its past and its vision firmly fixed on its future.

5 thoughts on “Yearning To Return”