SOMETIMES YOU SEE OR HEAR SOMETHING THAT JUST TICKLES YOUR RIBS and makes you laugh out loud. I’m not talking about hearing a comedian on TV, but something that comes out of somebody’s clever imagination. Something that you weren’t expecting that reaches out and hits the proverbial nail right on the head. I had one of those yesterday morning. A friend posted a comment on Facebook that hit me as so unusual, so out of literal context, but so right in its imagery that it stopped me in my tracks.

The general context was a discussion about a person’s irrational (read cuckoo) thinking about things when my friend posted this picture.

I don’t recall seeing a more appropriate comment that “says it without saying it” It made me think of other comments like it. That guy is a couple French Fries short of a Happy Meal.” – And – “His elevator doesn’t go all the way to the top.” Beautiful explanatory imagery.

I am a fan of language and all of its colorful uses. A comment like the “Cornbread” quip makes me want to stand up and applaud.

Whoever came up with that wonderful expression has truly mastered the subtleties of the language. The ability to say exactly what he or she is thinking in such a way that everyone, 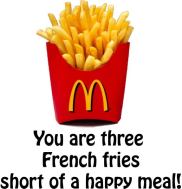 except the target of the comment, clearly understands the real meaning.

This quip about “Their cornbread” appears to leap from a Southern Appalachian culture. I find that I cannot say those words aloud without affecting a mountain drawl. It wouldn’t have the same impact if delivered by someone from Maine or Wisconsin. Without the proper accent the line just can’t hit home.

The clever use of language to create images in our minds is what separates us from the animals and most door to door salespeople. Selling vacuum cleaners does not require great verbal skills. The machine either works or it doesn’t and no amount of witty repartee can change that.

When someone has the power of language at their command all sorts of good or evil can be wrought. Great orators or writers can move nations and cultures. They can inspire people to greatness or great horror.

I’ve known a few, very few, great writers and speakers in my time. Some of them used their skills to move people and some of them worked to make people laugh – both worthy and noble efforts. I prefer the laugh makers. In a world filled with stress, anguish, and distrust, the jester can be a cup of cool water that helps us carry on.

This cartoon hit me at the right time. I needed a good laugh. It let me open a valve in my psyche

and let the frustration out.

I hope that you find something to do the same for you. Without it the brain and heart can inflate like a Puffer Fish until they pop. Not good. When that happens all too many of these suddenly deflated people decide to run for office. And that just starts the cycle all over again.

3 thoughts on “Cornbread And Puffer Fish”