Throwback Thursday From May 2015 – “I Have No Rational Explanation”

WHAT WITH ALL OF THE TALK and remembrances yesterday about various bars (Where I was never actually thrown out) it stirred up a cauldron of memories.

That can be either good or bad. I’d even settle for innocuous.

I used to work with a fellow in Cleveland, let’s call him “Jim” because that was his name. Jim was an intelligent, hardworking guy who had a cadre of friends that I could only describe as “Freakin’ Nuts.” Jim liked me and on occasion he would invite me along for an evening of hijinks and alcohol.

I’ve never been much of a drinker. I don’t like the way most drinks taste, the way they make me feel or how much it costs to get me into such bad shape.

I haven’t had anything to drink in close to 10 years now, but “Back in the day” it was another story.

For reasons I never could deduce Jim said that he was a hockey fan. There was no hockey team in Cleveland. Jim had never played hockey. He couldn’t even tell me the name of any NHL hockey team. That didn’t seem to matter. Jim had found a bona fide “Hockey Bar” where he fit right in.

The first time I went with Jim to his favorite hockey bar we arrived just in time for their favorite sporting event: Golf.

Of course, their version of Golf varied from the standard game played on grassy courses worldwide.

The hockey bar was located on one of the busiest streets in the City of Cleveland. A mere detail to the members of the DGA (Drunken Golfers Association).

Their game was more about accuracy than distance. The first and only tee was one of the rubber floor mats from behind the bar. It was relocated to just inside the front door of the tavern. With the golf ball teed up the object was, using only a nine-iron, to hit said golf ball into the air, over the heavy traffic, and to see who could come the closest to the front windows of the K Mart across the street.

I know, I know. This whole concept was a bagful of flaws just waiting to be opened.

Abandoning all good sense I just sat at the bar and watched. When they abruptly slammed the front door and hid the golf club behind the Juke Box I assumed that someone had gotten a little too close to the K Mart. At least that is what the police asserted when they arrived.

Jim decided, after the Pabst Blue Ribbon Open Golf Tournament ended suddenly, that it was time for us to go. It was the only good decision made that night.

Being a man with a sometimes inconvenient bladder I told Jim that I needed to hit the Men’s Room before heading out. In retrospect I should have just grit my teeth and probably wet myself.

When I opened the door to the Men’s I headed straight for my objective. It wasn’t until I tried to wash my hands that I saw – I swear to God Almighty that I’m not making this up – standing on the counter next to the sink was a dead pig. A dead pig with a lit cigarette in its mouth.

I didn’t try to find out.

I never went back to that hockey bar again. I felt that it could only go downhill from there. 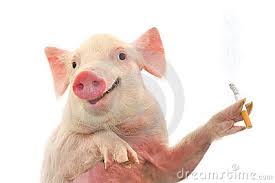 This is a Stunt Pig for purposes of illustration.