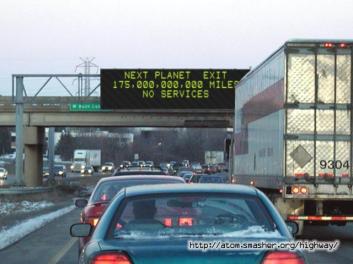 SOME THINGS ARE JUST BEYOND MY COMPREHENSION. A fact can be as hard and cold as last week’s biscuits, but I still can’t easily slip it into place in my brain. I’m not stupid, despite testimony to the contrary. I’m just a skeptical sort who enjoys being persuaded.

What brings this to the front right now? Lemme tell you.

All over yesterday’s newspapers, TV News, and the Web was a report that some astronomers, astrophysicists, or maybe they were insurance salesmen, had discovered a string of seven “Earth-like” planets revolving around a star some 40 light years off in that direction. 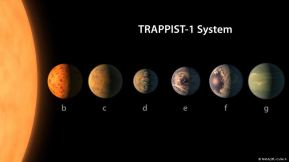 I know – there’s only six showing.

35,200,000,000,000 miles depending on road conditions, detours, and that side trip to see the rattlesnake museum in Yuma, Arizona. Your mileage may vary. If you are more comfortable with the Metric System it is 9.3 trillion kilometers – roughly the distance between Euro-Disney and a good time.

The scientists/guys who got telescopes for Christmas also reported that all seven planets show signs of liquid water. Well, so does our neighbor’s basement after a heavy rain. I need more proof. Is this

alleged water in an ocean, in a pool, or in a weak drink in the bar at the La Quinta?

I always have my suspicions about discoveries that are first announced by Yahoo News or in the USA Today. I mean, how many times have the bones of Amelia Earhart been discovered? (Those of you under 30 with a public school education – have someone look that up for you.)

A term that appeared a number of times in the news stories was “Earth-like.” What exactly does that mean? It has got to be more than just the water thing. To me the mere presence of water is not so much “Earth-like” as it is my “Left Knee-like.”

If they want me to accept these planets as “Earth-like” then I want to know – What is the Rush Hour traffic like? Is there a decent equivalent to Mexican food? Is there Baseball? These are the things that would indicate “Earth-like” conditions to me.

If you look at that picture of the planets again you will see that they are in a system called, “Trappist – 1.” My Catholic School upbringing makes me immediately wonder if these planets might be inhabited by a population of rather quiet, contemplative, folks who dress in white a lot. Inter-Galactic Good Humor people. Who knows? I certainly don’t. 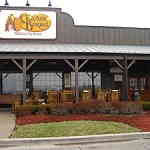 These planets are one heck of a long way off and getting there is going to take a while. Pack a lunch and just pray that by the time you are ready to go that you will find a Cracker Barrel or two along the way.

I’m looking forward to see how this story develops. Will there be something more concrete to surface, more verifiable? Or will it all turn out to have been a leaped-to conclusion based on some Cheetos dust that got onto the telescope lens.

5 thoughts on “Pack A Lunch”