It Has Been A Slice

WHO SAYS WE DON’T KNOW HOW TO BE SOCIABLE? We can be just as sociable as any other group of semi-civilized men who spend their Golden Years discussing the important issues of the day: Which was better – “The Man From U.N.C.L.E.” or “The Bionic Woman?”

The “Usual Suspects” as I call them, or my “Play Group” as my wife, the lovely and sarcastically fine tuned, Dawn, calls them, hold our meetings in the Chapel at St. Arbucks almost every morning over coffee.

We meet to exercise our Neo-Geezer skills and to lift our voices in curmudgeonly grumbling about almost everything of limited importance.

I think that such a gathering serves a multi-purpose agenda. It gets us out of the house so our spouses can catch their breath and it acts as an early warning line of defense against senility, dementia, and plain old stupidity. We monitor each other for signs of being overly serious about anything other than the vagaries of Sports, Television, and Doctor Visits. However, it is a good thing we are not judged on our appearance.

Most of us are already retired and have burned our arsenal of Power Ties. Those who are still employed don’t take it too seriously and dress as if they might be called out to perform a rescue in the wake of an exploded septic tank. But sometimes we can fool you.

Last night we held an extra plenary ad hoc remote meeting at the Pizza Hut down the street. A momentous occasion it was.

There was no special reason for this Gathering of Eagles. It was not a holiday, birthday, or acquittal. It was just an excuse to get together and annoy some people other than the Baristas/Acolytes at St. Arbucks.

If the truth was known, and far be it from me to be an ulterior motive denier, there was an unspoken purpose for that meeting.

Among the ranks of the Usual Suspects is a fellow (Let’s call him Orville.) who proclaims to be in a rather unique domestic situation.

While most of us are married, and when the topic of our wives comes up, we know what to do. We say, “My wife.” It’s not too tricky, but Orville never quite knows what to say. You see, he shares his domestic bliss with a woman (Ophelia) who is his Ex-wife. They married, divorced, and are now living together again, but not remarried. This causes Orville major confusion. He has referred to her as “My Ex,” “My Girl Friend,” “The woman I live with,” “Old Whatshername,” and even as “My Wife.” Old habits are hard to break.

We had a Christmas party, cake included, at St. Arbucks and wives were invited. Orville swore he would bring Ophelia. He dropped the ball on that – no Ophelia and we began to seriously doubt both her existence and his sanity. There was talk that, at one point, there may have been an Ophelia. We thought that she might now be hiding on the West Coast or remodeled up behind the drywall in Orville’s new home. We began to worry.

The most recent Conclave was planned for enough time ahead to give Orville sufficient time to either convince Ophelia to attend or move her bones to the deeper parts of the Wabash River.

Yesterday morning we all continued our push. Orville promised that Ophelia would be there. We didn’t believe him. We thought he would say that she was feeling a bit punky and decided to stay home. If he had done that I think we might have staged an Intervention and followed him home.

Cut to last evening and, lo and behold, Orville arrived escorting a very pleasant lady who vowed that she was Ophelia. We had no serious reasons to doubt her, even though one Suspect swears that he heard her refer to Orville as, “Hey, Mister.”

A pleasant time was had by all – Five Suspects, Three Wives (Counting the Suspicious Ophelia), Two Grandchildren, and One Sister-in-law. No one did anything to warrant Law Enforcement or Paramedics, so I count that as a successful soiree.

As far as the Orville and Ophelia Saga is concerned, I think we might need to cut him some slack. He’s a genial chap and there is mounting evidence that she might be Terre Haute’s (That’s French for, “No pineapple on my pizza.”) most successful Uber Driver – a good person to know. 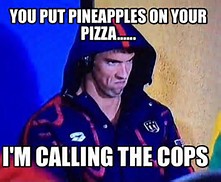 4 thoughts on “It Has Been A Slice”