Keep Your Eyes On The Road

I PUT THE BLAME ON THE CURVATURE OF THE EARTH. How else can it all be explained?

Twice in the past week there have been unusual events on America’s highways .

That may be a bit overdramatic. How about, “In the last week a couple of weird things have happened involving trucks.”

As a prefix with no provable causal relationship you might recall that not long ago I reposted a “Throwback Thursday” blog about a truck overturning in Georgia or Alabama, or someplace with a drawl. The truck mysteriously overturned on the highway spilling its load of Ramen Noodles. The fully loaded truck dropped sufficient Ramen Noodles to feed thousands of college students for a month.

Not long after I posted that truck story another 18-Wheeler dumped its cargo all over I-465 in Indianapolis. This time it wasn’t noodles, but 38,000 pounds of Marbles. The drivers on I-465 have enough trouble navigating on that poorly designed roadway. Add 19 tons of bouncing kid’s marbles and – let’s just say that I’m glad I wasn’t there.

There is no proof; Deductive, Inductive, or Empirical to link these two events – However….

Just yesterday an exceedingly odd truck accident occurred in Wisconsin. This time it was a load of “Skittles” that hit the pavement. Skittles – but only the red ones. Hmmm?

A perfunctory investigation soon discovered that the truck filled with red Skittles was en route to a processing plant where the candy was to be turned in cattlefeed. But only the red ones.

The Mars Candy Company, the manufacturer of Skittles, red and otherwise, has acknowledged that the pavement pounding Skittles came from one of their plants in Illinois, but they don’t sell any Skittles, red or otherwise, to be used for cattlefeed. Well, that candy didn’t stow away on that truck by itself. I think further investigation is in order.

While there have been Skittles, marbles, and even Ramen Noodles having nonscheduled unloadings I think my favorite truck incident took place near Xenia, Ohio about a year and a half ago.

It was on another clear and dry road when the truck driver lost control and the next thing you know 2,200 pigs were having the ride of their little lives.

If you are interested (And I can’t imagine that you aren’t.) here is the link to that posting from June of 2015.

I know that strange things happen every day of the week, but it seems that I end up being either a witness to, or involuntarily involved in them far beyond random chance. I can prove that I had nothing to do with any of these truck accidents. It’s just that people keep telling me about them as if I should be able to pull a Sherlock Holmes and find a slender thread that connects them all. I’m no Sherlock. I’m closer to that guy on the History Channel who is always talking about Space Aliens and UFOs.

Since there is nothing I can do about any of this crazy stuff I guess I should just sit back and enjoy it all. It makes my days interesting and keeps me off the streets at night – even when they are Clear and Dry. 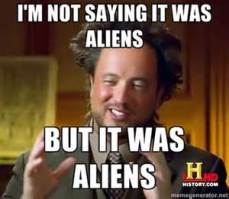 2 thoughts on “Keep Your Eyes On The Road”