I Intend To Rock Their World 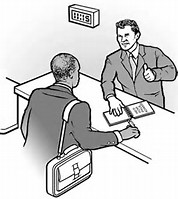 THINGS WERE GOING SMOOTHLY… TOO SMOOTHLY.

All we wanted to do was get on the airplane to Texas and do the whole Christmas thing. Perhaps we were asking for too much. To put it in just a few words – “Anything that could go wrong did go wrong.”

We had a scheduled flight to take us from Indianapolis to Houston. Our liftoff time was 7:45 AM. Rather than get up at 2 in the morning to pack the car and drive to Indy we did our usual thing. We went up the afternoon before, and checked in at a hotel near the airport. That way we could get a good night’s sleep, leave the car at the hotel, and take the hotel shuttle to the nearby airport. We have done this a dozen times without any problems.

Our shuttle was set for 6 AM.

At about 5:55 I started dragging luggage to the lobby. I knew something was amiss as soon as I got there. There was no one there. No desk clerk, no van driver, no van. I started calling out and walking into the hotel offices looking for somebody – anybody. At last I located the “Night Manager” – a Twenty-something kid who looked like he had just gotten back from a Kid Rock concert, after having made bail.

“Where’s the van to the airport? We are signed up for the 6 AM van?”

“Oh, yeah. The driver likes to go early. He left about 5 minutes ago.”

“I was here in the lobby five minutes ago, so that’s not the truth.”

The Kid Rock fan was starting to sweat.

About this time my wife, the lovely and luggage laden, Dawn, and our boy, Alex, came into the lobby. Kid Rock didn’t connect the dots. When Dawn asked him where the van was, he replied, “He just left at five after six.”

Dawn looked at her watch and said, “It’s only five after now.” Then I jumped in again. “This kid just told me that he left early. I was here at five till and the van was already gone. So, which lie do you want to go with?”

I’m sure that this was the first job this fellow had ever held where he didn’t have to wear a paper hat.

It was quickly determined that we were going to need a cab. Brainiac the Night Manager dug around and found a business card from a Taxi company. Twenty minutes later and a good 45 minutes past AM the cab appeared and we headed off to the airport.

CUT TO THE CHASE, JOHN! WE DON’T HAVE ALL DAY!

Our planned itinerary had us scheduled to arrive in San Antonio at roughly 11:30 AM Central Time, but thanks to the early van fiasco we missed our flight and had to be rerouted through Atlanta. Not so bad, I hear you say, except that our light to Atlanta was set for 4:30 PM and then to San Antonio at 9:50 PM.

We arrived in San Antonio at 11:30 PM. We had planned on getting a car there and driving too our ultimate destination – about a two hour drive. There was no way any of us were in condition to do that.

This mess, wholly the fault of the fools at the WINGATE HOTEL meant that we got to where we planned approximately 24 hours and several pints of stomach acid late.

I know that in a week or so I will be getting a Customer Satisfaction Survey from the WINGATE HOTEL CHAIN. I usually ignore those surveys, but this time – I am going to rock their world.

I am going to demand that they pick up our added expenses such as meals, etc. and our hotel in San Antonio. There is one other thing I am going to push for – both the van driver and the idiot night manger must join the ranks of the unemployed. No company can afford two twits like that.

We made it to the Family Gathering and enjoyed ourselves.

Oh, yeah. Both Dawn and I went through this carrying with us full Blown Head Colds.

2 thoughts on “I Intend To Rock Their World”