NOVEMBER 22nd. To most people under the age of 60 this is just another day on the calendar. Another day lost in the buildup to Thanksgiving. To those of us over 60 this date is, and always will be November 22, 1963, a Friday – the day the President was killed.

I was a senior in high school.

On that day I had just finished lunch and was heading off to Spanish class in the building across the street. It was about 1:30 PM. Pausing to cross at the corner, a car was waiting at the stop sign. The driver rolled down his window and shouted out to us, “Somebody just shot the President!” Then he drove off leaving us there wondering what was going on. When I got to my classroom the teacher was crying and told us all to return to our Home Rooms. It was there that we learned more.

The school had the radio playing over the PA system. The details were sketchy. The President was in Dallas and someone had shot at him from a window in a nearby building. Was he alive or dead? He had been rushed to a hospital. That was it. Over and over. We sat at our desks and listened in silence.

The minutes dragged on until the announcement was made that the President was dead.

We were all sent home.

The next few days were fused together into one long unbelievable bad dream.

When I got home my mother was crying, my father was not. Some years later he told me that when he first heard about the shooting he left work and went to a bar where he had a shot of whiskey for the first time in twenty years. It was not done in sorrow, but in celebration. That’s all I will say about that.

Our television was tuned to CBS and Walter Cronkite. Speculation, rumors, and facts tumbled out from Dallas. It was at first thought that the Vice President had also been shot. That turned out to be untrue, but the Governor of Texas was wounded by the assassin’s bullets. There was speculation about whether there was more than one shooter. That has never been truly laid to rest and probably never will be.

An arrest was made in the darkness of a movie theater.

Dozens of books have been written about those four days. All I can say is what I saw and what I heard in our living room.

I saw a casket and a woman in a bloodstained suit.

I saw a skinny man and a rifle bustled through the hallways of a Dallas Police Station. 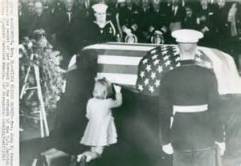 On Sunday I saw that same skinny man murdered on live television.

I saw long lines of people walking past a flag draped coffin. A woman in black silently knelt and kissed it.

I saw a parade through the streets of Washington and across the bridge to Arlington. There was a riderless horse.

November 22, 1963. A Friday when the decade of the 1950s ended with a gunshot, and the 1960s began with a small child stepping forward to salute as his dead father passed by. 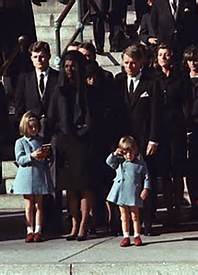 4 thoughts on “Four Days In November”