The homes in the Hamptons are as close as one can find anyplace in this country to real palaces.  Size and ostentation were the bywords when most of the so-called “cottages” were built in the late nineteenth century.

The men sat in two soft, green leather wing chairs, facing each other.  Don Giani’s cottage was absurdly large and provided him with the aura of old money that he felt painted him with respectability.

The room was filled with too much of everything.  The Don had wealth, but not the taste to know when enough was enough.  Tables were crowded with small mementos and photos.  He kept an antique barber chair in one corner, ostensibly to remind him of his humble roots.  The reality was that he liked to sit in it during meetings.  It made him feel like a king on his throne.  There were at least a dozen pictures of his daughter at various ages.  She was his prized possession.

“Dominic, where is my daughter?  Have you found her yet?”

“Honest, Don Giani, I don’t know where she is—yet.  I traced her to Boston, but after that, nothing.  Do you think she might have gone up to Montreal, you know, to visit her people up there?”

“No.  Let me tell you something, Dominic.  I’m losing my patience with you.  I’ve got my own people out looking for her, too.  I already know about her car in Boston and the airline tickets.  She’s not in Montreal, or Miami.  I would have heard and she’d be back home by now.

Dominic was starting to sweat.  Under his suit jacket, he could feel his shirt sticking to his back.

“Sir, I hear where you’re coming from, but since I don’t actually know why she took off, it may have nothing to do with me.  She may have just gone off on a vacation.  So, I don’t think, necessarily, therefore, and ergo, that I should have to pay for something you are choosing to do on your own.  I love her with all my heart and I’m scared for her.  I don’t know where she is and I want her home, that’s all.  Can’t you see this from my point of view?”

“My daughter fell in love with you for some reason and wanted to marry you.  I wasn’t happy with her choice.  I always thought you were never going to amount to anything beyond a two-bit grift.  I was right.”

“I done all right,” protested Dominic.

“Don’t interrupt me.  You ‘done all right’ you say?  The only reason you’ve got more than two pair of pants to your name is because of me.  I give you whatever you have.  I have to order other people to throw some crumbs your way.  I protect your sorry ass. Without me watching over you, Beverly would already be a widow.  Dominic, you are nothing but a slow-witted, violent fool.”

Dominic’s fear was turning into a barely concealed rage.  His earlier decision to kill Don Giani, after first taking care of his wife, was feeling more and more like a very good idea.  But for now, he had to sit and take the insults.

“Don Giani, I thank you for whatever help you have given me over the years, and I’m truly grateful.  I really am, but I came here to talk with you about Beverly.  I didn’t come here to be insulted and called names.”

With a quickness that belied his years, Don Giani Montini reached out and slapped his son-in-law hard across the face.  The sound cracked like a small caliber gun and Dominic’s cheek reddened immediately.  Dominic restrained his reflex to return the blow, to beat his father-in-law to death.

“You useless little piece of trash,” the Don said softly.  “Get out of my house and don’t come back without my daughter.”  He looked at Dominic like he was something he had stepped in.  “I ought to just kill you myself, right here, right now, but you are still, much to my disgust, family.”

Dominic stood up, adjusted his lapels, composing himself, and headed toward the door.  He was quiet.  He didn’t want to say anything more.  He would get his satisfaction from seeing Don Giani’s eyes staring up at him from the gutter, dead.

“Dominic, remember this.  If you have harmed my child you will beg me to let you die.”  He lowered his head and closed his eyes.  A major headache was starting to gather.

As he opened the door, Dominic turned and faced Don Giani.  It was time to twist the knife a little.  He couldn’t resist the urge.

“Don Giani?”  When the older man looked up, Dominic reached out to the small table by the door and picked up a framed photograph of Beverly as a child.  With his ice cold eyes fixed on his father-in-law, Dominic kissed the image of Beverly’s face and then tossed the picture to the carpet.  He smiled as he walked out and closed the door quietly behind him.

Don Giani watched the door close and made a decision. 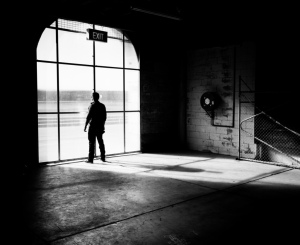