As I pulled into the parking lot, headed toward my usual Gimp Spot to leave the Toyota I noticed something unusual – the lot was almost full.

Normally at this time of day – scratch that – this time of night, the lot is all but deserted except for the cars belonging to the Early Shift Geezers who must sleep over. No matter when I arrive they are already there swilling coffee and comparing hip replacement stories.

When I stepped inside there were about fifteen additional humans in there. The extras were all young, male, and large – College students.

That is no surprise. In Terre Haute (That’s French for “Education is Good” – Senator Blutarsky.) there are two schools within pub crawling distance of the Chapel. The large boy’s T-shirts confirmed that they were from Indiana State University.

Despite their numbers they were very quiet. They had their large heads deep into their books, with the exception of two boys who looked to be asleep, face down on the table.

My first thought was that they were all “Student Athletes” (Read “football players” desperate to maintain their academic eligibility.)

What threw me a real “Hail, Mary” pass was that, instead of Western Civilization or English Literature textbooks, all of these large guys were reading the Bible.

Knowing what I was like in my college days, my first thought was that they were all looking for loopholes. Why would the entire Offensive Line be in there at 6:43 AM studying the Bible? Some were even taking notes. Perhaps they were under some Coaching mandate to keep their 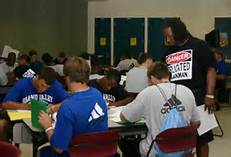 “Offensiveness” on the field and not in the bars or on the streets of the town.

Well, the way I look at it is this: It’s 6:43 AM and this group of young and large men all have a pumpkin spice latte in one hand and the Good book in the other. This is not a bad thing.

It is evidentiary of several points –

I think it is a good idea to prepare yourself to meet your Maker in such circumstances.

I sat back in the corner and watched them for about 20 minutes. They were an intent lot. Nobody had headphones on. Their iPhones were all holstered. The sleepers didn’t snore. Then…

At 7:10 AM it was like somebody set off an alarm clock that only these young guys could hear. At 7:10 AM the Bibles closed, the last of the lattes guzzled, the sleepers awakened and, as a unit,

they all stood up and left. They must have had the internal timers of a swarm of cicadas.

In a flash they were gone – except for one tall kid. He stayed in his chair, eyes on the Scriptures. I figured that he must be the Quarterback. Everybody knows that they get special treatment. This one gets extra Bible time (Or as I heard a player call it once, “God’s Playbook.”) I also noticed that, as soon as the others left, Mr. Quarterback pulled some huge headphones out of his backpack. Clever boy.

This morning I wanted some quiet time to crawl into consciousness and get some writing done. Thanks to the Football Scripture Study Group, who never made a peep, I got both.

One thought on “Go Long For Jesus.”