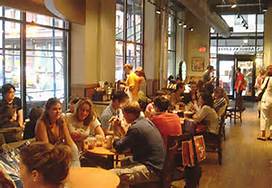 I FOUND MYSELF INVOLVED IN SOMETHING YESTERDAY. Something I rarely do anymore. I had an adult conversation with one of the Usual Suspects at St. Arbucks. The “Usual Suspects” (I’ve written about them before) are a group of folks who tend to congregate for coffee at the nearby Starbucks.

On many mornings there might be 6 or 7  of us huddled in the corner chatting about…well, you see, that’s the problem. The Topic du Jour might be Sports, Grandchildren, What’s on TV, What’s no longer on TV, or the general state of the world in contrast to the way it all was when we still had hair and no artificial knees or hips. Straight out Politics is rarely discussed – it tends to raise blood pressure and some of these people are already wearing Pacemakers.

Yesterday morning was different – at least I thought it was for awhile.

My fellow Suspect and I were discussing The Wall Street Journal and the difficulty in always finding the right person for the right job. That was when he told me, being a Contractor, about a recent job applicant who called him looking for work.

When asked for his name he gave a fake name. Our Contractor knew this because this same guy had called him a couple of days earlier, from the same phone, using a different name. He had been rejected then.

If it had been me taking that call, and I knew he was shining me on, I would have given him a verbal heave-ho, but Contractor/Suspect had a softer heart, so he told the guy to come out to the jobsite. At the jobsite the interview continued until Mr. Fake Name slipped in a Doozy of a non sequitur into the middle of the interview – like plopping a frog into the punchbowl at your daughter’s wedding.

“Yes, I’m available to start work today. I like to blow things up.”

Being available for work is good. Blowing things up is more questionable. The job in question was in CONstruction not DEstruction.

The main Chapel at St. Arbucks is used as a branch office by all sorts of people. There are job interviews going on in there every day. Even Army recruiters have been in there grilling young potential soldiers who – well, all I can say is that most of them were not Taco Bell material.

My favorite job interview eavesdropping came about five years ago when St. Arbucks themselves were looking to hire ONE Novice and had close to 200 supplicants, er, applicants.

It was almost impossible for me to NOT overhear the interviews – mainly because I sat down at the next table and took notes. (I prefer to say that I was on a “Fact-Finding Mission” rather than just being nosy.)

The Manager asked one, rather scruffy looking, fellow one of those standard interview questions.

“What do you see yourself doing in 5 years?”

The man thought for a second and then answered,

I came close to doing a spit take. I do not know how the Manager kept a straight face.

He didn’t get the job, but I wondered whatever became of him. I think I found out when my fellow Suspect said, “I like to blow things up.”

3 thoughts on “The Job Interview”