Getting An Oil Change – Not At Grease Monkey

I LIKE CARS, BUT I CAN’T BUILD THEM. I can’t repair them. I can’t even sell them. I just like driving them and I do appreciate them as an Art Form. The Jaguar XKE was once exhibited at the New York Museum of Modern Art.

The design of some cars can be quite aesthetically pleasing. Of course, there are other cars, too many of them, that look like they were designed by a committee of drunken squirrels.

For some reason most American car companies, that have design teams working around the clock, rarely come up with anything that has more style than an empty cardboard box. You would think that 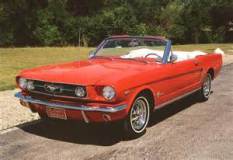 they could do better, but they hit the mark only once in a blue moon – the Ford Mustang in the mid 1960s, the 1957 Chevy Bel-Air, the 1963 Corvette, and a handful of others over the last half century.

More often than not they crank out monstrosities like the AMC

Pacer, the Ford Edsel, the Chevy Corvair and the explosive Ford Pinto. Those are just a few of the more egregious eyesores, some of which should have come with the “Jaws of Life” as Standard Equipment.

The Jaguars are cars built in England by a company that was once part of British Leyland Motors that was then taken over by Ford, and is now owned by Tata Motors – a car company from India.

What a strange world we drive in.

Anyway – the reason I bring this up at all is that I have never, and short of coming across a winning lottery ticket, will never own a Jaguar of any kind, other than a Matchbox version.

There are certainly more expensive cars than any tricked out Jaguar around. Take the highly styled Bugatti Chiron – 1500 Horse Power and 250 MPH – all for a mere 2.7 million dollars.

Interested? An oil change on this buggy costs $20K. I think the Jaguar F-Type Coupes and Convertibles have class as well as style.

While we may never actually have the keys to a Jaguar in my pocket it is comforting to know that they are thinking of us.

Last week, addressed to my wife, the lovely and the co-appreciator of the Jaguar, Dawn, we found in our mailbox an envelope, a rather substantial envelope, from the fine folks at Jaguar. In the envelope was a relatively high-tech piece of advertising touting the latest thing from Jaguar – an SUV.

Now, just between you, me and the barista who is staring at me, the new Jaguar SUV is not

going to be remembered as a classic automotive design. In fact, I think it is as ugly as a plateful of dropped lasagna.

As Jaguars go it is a monetary bargain with a base price of $53,900 – but no matter how many options you pile onto it (up to $70K) – it is still Kissing Your Sister Ugly and has no more style than a used tea bag.

If I want something to haul gardening supplies or luggage for a 12 piece Swing Band I’ll go buy something more appropriate, like a dump truck. But if my vehicle is going to have the name Jaguar on it I am not going to fill it with mulch and porkpie hats. 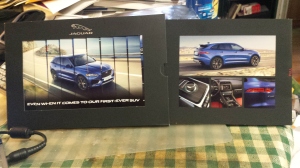 Perhaps Dawn and I should write back to Jaguar.

“Thank you for the lovely mailer announcing the new SUV. It was received and pawed over, but we would much rather be getting the ads for your Coupes, Convertibles, and other more visually pleasing vehicles. We want you to feed our fantasies, not remind us that we haven’t edged the lawn in two years.

“How about filling our mailbox with advertising for the F-Type Coupes and Convertibles? Make us salivate, not sweat. Make us want to get a car that doesn’t look like the box our washing machine came in.

“Thank you, our British Cousins,

2 thoughts on “Getting An Oil Change – Not At Grease Monkey”