A Thing Of Beauty In Nine Innings 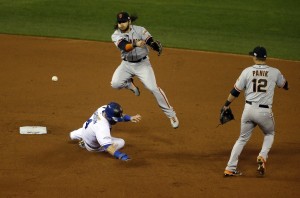 IF YOU HAVE BEEN FOLLOWING this blog for very long you would have picked up that I am a BIG fan of San Francisco Giants baseball. I lived there for 25 years and it gets into your blood stream. I’ve infected my wife, the lovely and articulate Dawn, with Giants Fever and we both stay up much too late when the Giants are at home on the west coast.

Last Tuesday night they were playing in New York against the Mets. It was not a good day for the Mets.

Heston gave up no hits and no walks. The defense behind him played flawlessly, committing no errors. Three Mets did get on base when Heston had a pitch or three wander off track and hit the batters. That was it.

We watched the entire game and it was a thing of beauty indeed. Young Heston (27 years old) showed poise, self-control, and laserlike concentration. He completed the game averaging just a hair over 12 pitches per inning. Very economical.

I know, I know. Some of you are going, “Here he goes again on his baseball kick.”

How does a thing like this happen to an otherwise rational adult? I don’t know. All I know is that it happened to me and I make limited pretense to being a rational adult anyway.

Baseball is a child’s game played at breakneck speed, even though some people complain that it moves at a snail’s pace. It is the only major team sport played without the tyranny of the clock. It is the only team sport where it is the players on defense that control the possession of the ball.

It is the only sport that, as a child, I could play with any degree of success.

Growing up with full use of only one arm and one leg I was no threat in basketball, football, tennis, hockey (Gimme a break), track and field, golf, or swimming.

My skills in the pool are close to that of a blacksmith’s anvil.

Those other sports were beyond my abilities, but in baseball I could make a reasonable effort and get reasonable results.

I couldn’t run worth a damn, but if you hit the ball far enough you don’t have to. Even so, my hitting was marginal, but I was a good pitcher. My one good arm was strong enough for me to scare other kids my age.

My career was limited to games with and against other neighborhood kids. I wanted to play on a “real” team, but that required getting a doctor to sign a form saying that I was physically able – and that was never going to happen. I guess they felt that having me running around the field while wearing steel braces on my leg was not a good idea.

Since those days I have remained an avid fan of The Game, transferring my loyalties from the Pittsburgh Pirates to the Cleveland Indians and onto the San Francisco Giants.

When you finally find the treasure the twisting route on the map becomes unimportant.

Watching a cleanly executed 6 to 4 to 3 double play is sharing in a filigree of speed, timing, prowess and unerring accuracy – all while avoiding the spikes of a charging runner.

Yeah, so I do get excited by things like Chris Heston’s No-Hitter the other night.  I enjoy watching it and appreciate the skill and hard work it takes to make it look so easy.

On an evening like last Tuesday it was all so beautiful.

One thought on “Throwback Thursday from June 2015”