Throwback Thursday “OK, So I’m Not A Poet” 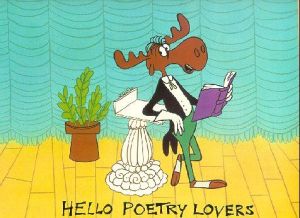 I’VE BEEN CREATING STORIES since I was a kid. I remember writing a Cowboys and Indians epic and showing it to my teacher, Sister Mary Something-or-Other. She was not impressed.

When I got to high school I signed up for all of the creative writing and journalism classes I could. My teachers told me that I could really spin a yarn, but…

I can rhyme with the best of them, but I could also stretch it until it hurt.  I could even ad lib aloud in iambic pentameter. I could create those ephemeral, wispy, images to evoke deep emotions, but it seemed that the emotions I evoked were manifested as either gagging or giggling. The teachers didn’t like that. I wasn’t trying to be a smart aleck or wanting to appear to need some serious counseling. My inner poet wasn’t very, well – poetic.

But I could write limericks. Oh, yes, and my teachers were not amused.

“There was a young girl from Peru.”

That was how most of my limericks began – with some girl from some distant land – or some young man with indescribable talents. From there it would go downhill quickly, and stay there.

While my teachers didn’t publicly appreciate my “poetry” my friends seemed to enjoy it.

“There was a young man named Gautama.”

For two years I served as the “Features Editor” of the high school newspaper. I was always trying to slip a limerick past the editorial gaze of the teacher. He was on to my “poetry” and used up several red pencils on my submissions.

When I was given a classroom assignment to create a real poem – describing the beauty of the mist along the river on a winters morn – I ended up turning in “There was a young snowman named Chuck.”

You see my problem?

In the years since school my life has taken me through many twists and turns. Life showed me that there were people out there who not only liked my limericks, but had gone through the same academic torment as I. Those people were usually found inside the beer-soaked walls of nightclubs. “Mama, I’m ho-ooome.”

While I could get a giggle or two with my limericks, there were others who could set an audience on tilt and melt the polar ice cap with their rhymes.

The best limerick-ist I ever met was a man named Warren, a large, genial, comedian from New Orleans who could send an audience into convulsions.

“There was a young woman named Alice.”

So began one of his finest poems. I will not complete it here. Someday, if we ever meet over a beverage, ask me and I’ll fill in the blanks for you. And then I’ll hand you a towel.

One thought on “Throwback Thursday “OK, So I’m Not A Poet””