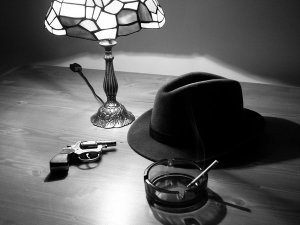 The outside of the Central Police Station, where the Chief had his office, looked like it hadn’t been cleaned in decades. The men and women who fought to protect the city from people like Dinwiddie were forced to work in squalor.

“The Chief?” The Desk Sergeant was incredulous. “Really? Well, his Capital ‘O’ office is up on the third floor, but his real office is in the back booth at Daquila’s bar down the block.” He checked his watch – 9:47 AM. “Yeah. He should be there by now.”

The Sergeant was right. The Chief didn’t even see me when I slipped into the bench seat across from him and his Boilermaker.

“Good Morning, Chief. We meet again.” He looked up, saw it was me and tried to bolt, but I had already stretched my aching legs on the bench next to him, blocking his escape.

“Sit still, Chief. I’m not going to hurt you. I’d like to, as a private citizen, but I’m here on business and I need you with all your teeth, able to talk.”

“What do you want? Leave me alone. I can’t tell you anything.” His breath was already late at night and it wasn’t even lunchtime.

“What has Dinwiddie got on you?”

“Oh, come on. The way he has you acting like his lapdog? What has he got?

“Chief, you either tell me or I make something up and go to the newspapers – and I’ll make it nice and juicy. Talk.”

He wrapped his hands around his sweaty mug like it was Dinwiddie’s neck. His face looked tortured.

I took the mug away from him. The shot glass was already empty, and he sobbed out his story. The Chief’s son, Miles, had been fighting a drug habit for years. Dinwiddie exhumed him from a Skid Row flophouse and has been holding him at the bakery plant, just like George Sweet. He’s kept the son in a drugged up stupor for almost a year and kept the Chief in his coat pocket.

“He says he’ll kill my boy if I don’t keep the Law off him. I believe him. If he kills Miles it’ll kill my wife too. I don’t have a choice.”

“Then let’s make sure that nothing bad happens to your boy, Chief. I’m going to make a phone call and then I’ll need you sober enough to drive.”

“What are you going to do?

“We’re going to get your son back.”

I dragged the Chief with me to the phone booth back by the Men’s Room and I dialed Mrs. Sweet. She answered the phone like she was the hired help.

“Sweet residence. Who shall I say is calling?”

“It’s me. I think I’ve found a way to end this, once and for all. I want you to gather up all the paperwork that Dinwiddie wants you to sign over to him.”

“Why? What are you going to do?

“I’ll fill you in when we pick you up. Be ready in about an hour. You, me and the Chief of Police all have a very large bone to pick with Dinwiddie and we’re going to pay him a surprise visit.”

— Next Week – The Conclusion —